Black Clover Chapter 293: Release and Where to Read

My Hero Academia Manga Chapter 327: Rest, Everyone Takes Rest For Once

Tokyo Revengers Breaks All The Charts With 40 Million Copies Now In Circulation!

Chapter 293 of the manga will be out on May 16. Last week’s chapter was delayed, maybe because of Golden Week. So far, we are not aware of a delay, so fans can rest assured that chapter 293 will be out on the above date. The manga has 28 volumes and 292 chapters so far, and the number is bound to grow!

Where to Read Black Clover?

The manga is published in Shueisha’s Weekly Shonen Jump. Since Shueisha owns the rights, Black Clover is available on the Mangaplus website. Readers on the go can use the Mangaplus App to read the manga and stay updated. However, this heavenly service from Shueisha is not available for free (sigh with grief). Manga fans can read the translated version on VIZ Media which owns the distribution rights for the English version. VIZ Media always creates a buzz for the manga through its Twitter handle. In a recent tweet, a fresh scan from one of the chapters has been made available for fans.

What to Expect from Black Clover Chapter 293?

In the previous chapter, we saw Magna’s past and how he gained control over his magic. Despite being a peasant with low magic powers, he fought and won many battles. Magna still wants to prove himself. He wants to show that he should be a deserving member of the Black Bulls. In a violent fight, Magna splits his hands and his magic before giving him a final warning.

Asta, the protagonist of “Black Clover.”

Despite being bruised so badly, Dante is not afraid because he relies heavily on his Regeneration Magic. Now, what will happen in chapter 293? Chapter 293 might give us a deeper look into Magna’s resolve as his fight continues. Most likely, Asta will interfere once he regains his union mode. So, will Magna survive until then, or will he die at Dante’s hands? Read Chapter 293 to find out.

Chapter 293- “A Peasant’s Strong Will To Fight!” will show us a struggle between Magna and Dante in the magical world of Black Clover. Black Clover never fails to disappoint us a mainstream manga that has also been adapted into an anime (and successfully so!). 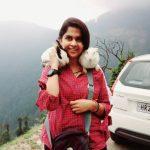 Tanishka is a student at the University of Delhi with a keen interest in writing, art, and many other things. She is passionate about stories and loves all things anime and manga.