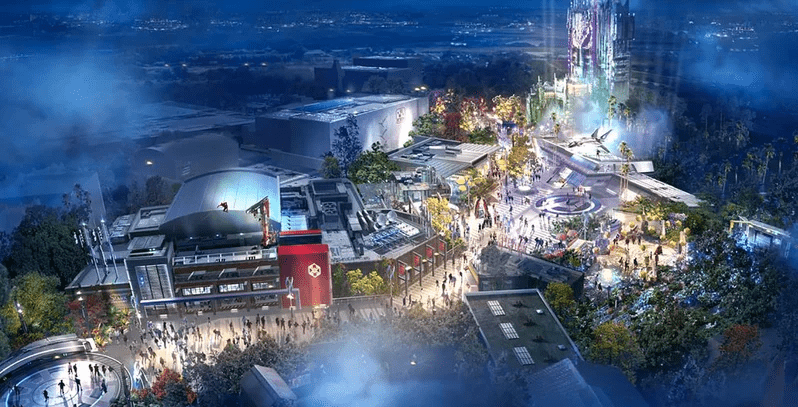 Disney will now create a park based on Marvel Universe theme similar to Disney land. Disney theme parks such as Disney California Adventure will develop a park in summer 2020, Hong Kong Disneyland in 2023, and Walt Disney Studios Park in 2021. All inspired by Marvel Cinematic Universe theme, named as Avenger Campus. According to sources, they all will get developed by  Walt Disney Imagineering along-with Marvel Studios.

At Disney California Adventure the park will occupy the space which was pre-occupied by A Bug’s Land.

At Hong Kong Disneyland it will occupy the  Buzz Lightyear Astro Blasters space.

At Walt Disney Studios Park it will take over the Backlot area.

Mostly these three parks will have a Spider-Man ride familiar in them and also Doctor Strange show. This new piece of art concept for the park will give a chance for the visitors to meet and greet Wakanda, where the Avengers are in the thick of battle. Along with Iron Man, Captain America, Thor, Ant-Man, Black Panther, Captain Marvel, Hulk and the Dora can be seen fighting off the space occupied by the bugs, which comes from the African nation.

At  D23 Expo 2019 Disney parks announced about their plans and upcoming new expansions. One of them was Avengers Campus opening dates. Go through the Disney Parks Pavilion Tour at

D23 Expo twitted about the update on Avenger Campus:

Time to assemble to Avengers Campus! A brand-new E ticket attraction is headed to Disney California Adventure, where Guests will fly along with the Avengers and adventure to Wakanda! #D23Expo

Tom Cruise Would Have Been Iron Man If Robert Downey Jr...

Princess Principal is under Lockdown