Powerful and intimidating clans fill the Naruto Universe. Their strength gave them the way to becoming some of the most influential clans. Each clan in Naruto has its own unique techniques or exceptional prowess. For example, The Sharingan, a dojutsu unique to the Uchiha Clan, or the Shadow Paralysis Jutsu unique to the Nara Clan.

While all the clans are different and powerful in their way, some have overwhelming power Additionally, throughout Naruto, these clans formed villages and fought for control and land. However, only one of them can hold the title for “The most powerful clan in Naruto.” 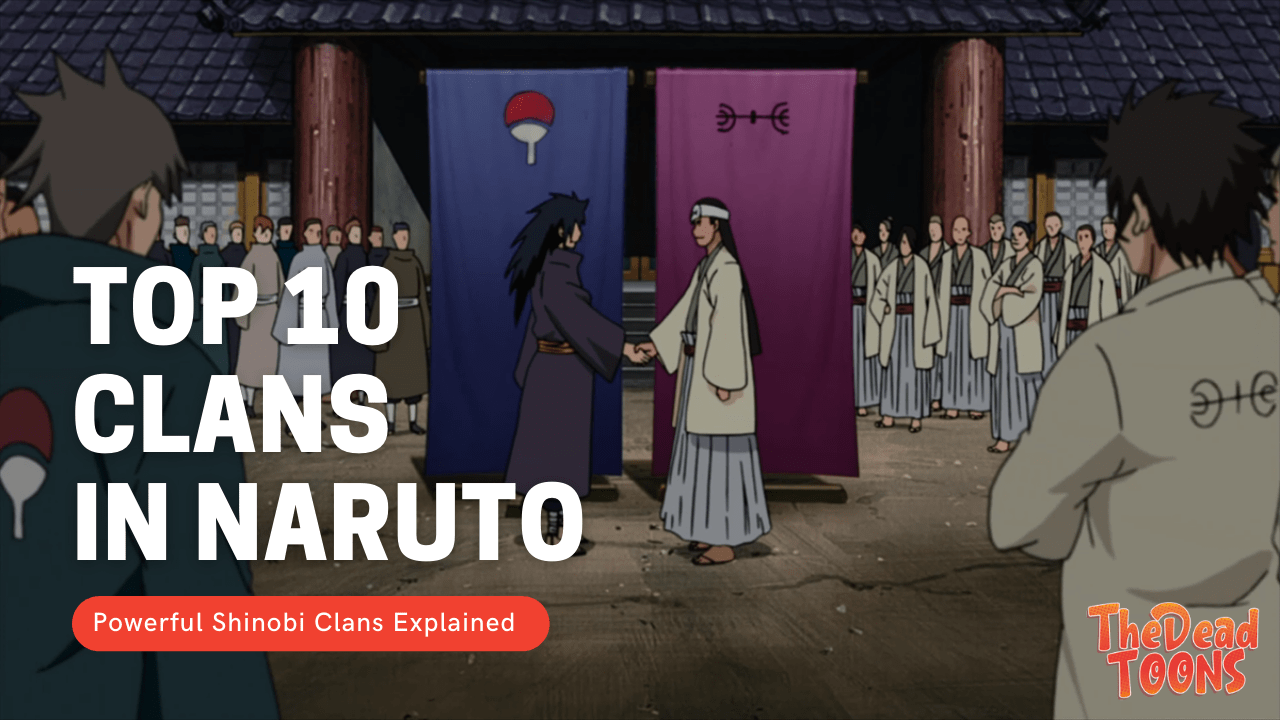 Today we will look at the top 10 most powerful clans in Naruto. Starting from the weakest and ending with the strongest.

Although the clan’s unique ability may be a little weird subsequently no one can deny their absolute power. The ability to control an armada of insects. This symbiotic relationship between the clan members and a unique species of insects (who feed on Chakra) makes the Aburame one of the strongest in Konoha. Shino Aburame is their most known member, he played an essential role in the 4th Great Ninja War, and now is a teacher at the Konoha Ninja Academy.

Many skilled Nara Clan members make up the Konoha great ninja forces. Their power is a result of their clan’s secret Jutsu. Using shadows to attack and paralyze opponents. Their most powerful member and the most intelligent man in Konoha is Shikamaru Nara. He is able to paralyze the 5 Kages, except Naruto, of course. Konoha wouldn’t be at its peak military strength without the Nara clan’s members’ extraordinary power and intuition.

The 6th Hokage Kakashi and his father Sakumo are the only known members of the Hatake Clan. Yet, these two are powerful enough to be stronger than dozens of other clans. With Kakashi being so powerful that he became Hokage, and his father being a renowned and feared shinobi, the “White Fang,” stated to be more powerful than all three Legendary Sanin combined. It is no doubt that they are part of the top 10 clans of the Naruto verse.

The members of the Sautobi Clan are capable of performing a wide variety of techniques. Hiruzen Sarutobi, the Third Hokage, was one of the renowned members of the clan and the most powerful Hokage at the time. This is because he was proficient in all nature styles and even knew the secret jutsus of clans such as the Nara and Yamanaka. Their other members include Konohamaru, one of the only ninjas who can perform an S rank Jutsu, known as the Rasengan, and Asuma Sarutobi, the strongest melee type fighter of Konoha.

Although the series only introduced one member of the Namikaze Clan to the fans, that man is alone worthy of the number 6 spot on this list. That man is Minato Namikaze, the 4th Hokage. He was feared by entire nations and the sensei of the most potent ninjas of the Naruto verse. He is renowned as the fastest ninja and is also one of the most intelligent, and to date, he holds the record for the highest score at the Ninja Academy.

The Hyuga clan is more famously known for their unique Dojutsu, The Byakugan. Their famous technique, known as the Gentle Fist, allows them to attack their enemy’s chakra points. One of their most powerful techniques is the renowned as the most powerful defense Justus in the world. Their most puissant members include Neji Hyuga, Hinata Hyuga, and Hiashi Hyuga. All of whom played a paramount role during the 4th Great Ninja War.

One of the most powerful clans to ever exist. Whose mere existence posed a severe threat to the entire world. A clan that took every single village to work together and destroy. This clan is the Uzumaki clan. Feared due to their robust sealing Justus and massive chakra reserves, the Uzumaki clan is one of the most powerful clans ever to exist. Notable clan members include Naruto Uzumaki, the most powerful ninja in the Shinobi world, Kushina Uzumaki, Naruto’s mother, and a Jonin level ninja, and Nagato Uzumaki. The leader of the feared group – Akatsuki.

The Senju Clan was one of the Hidden Leaf Village founding clans; their leader Hashirama Senju is revered as the God of Shinobi. His unique Kekkei Genkai, wood-style and immense chakra reserves allowed him to go toe to toe with tail beasts clad with the power of a Susano. His brother Tobirama was the founding father of multiple things in Konoha; this included the Police Force, Chunin exam, and various Jutsus, such as the Shadow Clone Jutsu, Flying Rajin, and the most dangerous Resurrection Jutsu.

The Uchiha’s are well known for their scarlet red eyes, the Sharingan. One of the most redoubtable Dojustus to exist, granting its wielder the ability to easily watch their opponent’s movements and copy their hand signs and Jutsus. In addition, it is not surprising that a clan filled with these individuals is the Shinobi World’s strongest clan. Their Sharingan has the power to evolve into even more potent eyes, such as its Mangekyo, Eternal Mangekyo, and the most powerful, the Rinnegan form. Few of the strongest Uchiha’s include Madara, Obito, Sasuke, Itachi, and Shisui. Three of whom are capable of overpowering all the nine tail beasts combined.

The last clan and the most powerful one in the Naruto verse do not originate from the shinobi world but rather from a planet far away. The Otsutsuki Clan. They are the renowned founders of Chakra and are capable of eradicating planets single handily. Their mission is to harvest all the life energy from the planets they visit. The most powerful members introduced to date are Hagaromo and Isshin Otsutsuki. Their power enables them to destroy and create worlds and travel in between universes easily. Therefore, there is no surprise that these extraterrestrial beings are the strongest in Naruto.