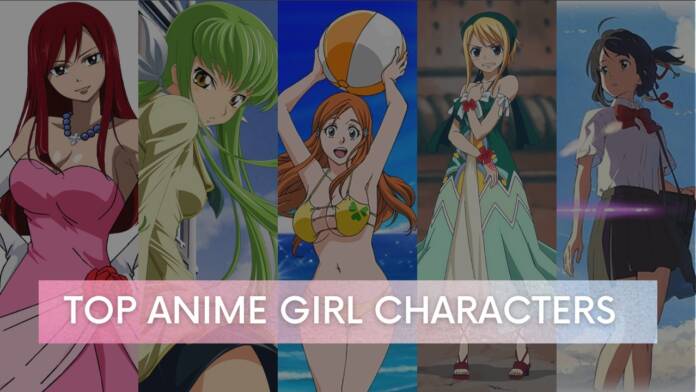 Have you ever wonder who the hottest female anime character is? Although not so realistic in their physical features, anime girls have brought us some of the animated world’s most sensual and gorgeous ladies. We have curated a list of the sexiest anime girls there for all the anime lovers out there. Note that we have not ranked the list. Here is the list of smoking hot anime girls ever without further adieu.

Elizabeth Liones is the royalty of the Kingdom of Lioness. She is the daughter of King Batra. She is a druid, and later we know that she is the reincarnation of a goddess and is very powerful. With her silver hair and large eyes, she has captivated many hearts. She wears a tight top and a skirt which complements her body. Meliodas often trouble her by touching and groping her, but she always forgives him. Elizabeth is exceptionally kind, caring, and strong. She sets out to find the Seven Deadly Sins on her own to free her kingdom from the corrupted Holy Knights.

Yoruichi portrays the most substantial female cast in the anime ‘Bleach.’ She is dark-skinned and has an athletic figure, one of the few black anime girls we see ever. She is pretty endowed and attractive. Yoruichi used to be a Captain in the Soul Society. Yoruichi usually takes the form of a cat while going outside. Ichigo and his friends met her in this form when they were at Urahara’s shop. She trained Ichigo to reach his Bankai. In fights, Yoruichi proves to be a challenging opponent, and her speed is her trademark.

Also know as The Byakugan Princess, Hinata is Naruto’s one of the most loved main characters. Though anime portrayed her as quite shy and weak initially, Hinata worked hard being inspired by Naruto and became a great Ninja. She became quite Brave too and jumped to Naruto’s aid when Pain Nagato pins him down. Hinata has a curvy figure. Hinata has the Kekkei Genkai, Byakugan, a visual prowess that the Hyuga clan people possess.

If you are asked to name the strongest mages in the ‘Fairy Tail,’ then it is sure that Erza Scarlet’s name will come to your mind. She is an S-class mage and is one of the Fairy Tail guild’s most vital members. Erza has a voluptuous figure, red hair, wears custom-built armor, and wears a blue skirt and diamond earrings. Erza is quite proud that she is a Fairy Tail guild member. The most important thing for her can protect her companions. Erza Scarlet is also one of the hottest anime girl in Fairy Tail Female characters competing with her teammate Lucy Heartfilia, and both are beautiful and badass anime girls.

Name is one of the chief characters of ‘One Piece.’ She was one of the first members to join the Straw Hat Pirates. Name is a talented navigator. She aims to create an accurate map of the complete world. This is one of the reasons she joined Luffy’s crew. Luffy always protects her and respects her. Name has a slim and attractive figure. She has a tattoo on her arm, which means Milan and pinwheels. The tattoo is a homage to her family in her village. Name is the hottest anime woman in One Piece ranked by fans.

Next on the list of sexy anime girls is the pretty Asuna. She is one of the leading characters of the ‘Sword Art Online’ anime series and is the lover of Kirito. But don’t be mislead by her looks. She is a very skilled player in the online game on which the series is based. This has earned her the nickname of Flash. Being endowed with both skills and physical beauty, she is highly sought after by others.

Up next in the list of sexy anime girls is the innocent and shy Orihime from ‘Bleach.’ She is one of the sexiest anime girls in the series, with the right features. She has a crush on Ichigo but always finds it difficult to confess her emotions. Inoue is a sweet and sexy girl.

There were many sexy girls in ‘Akame ga Kill,’ and Leone was one of the hottest. She is a skilled fighter with a beautiful figure. Her sultry and revealing outfit hails her sexy body. She has abilities similar to that of a lion. She is a happy-go-lucky person and lacks ladylike manners, making her even more attractive.

Mikasa Ackerman is one of the most gorgeous and sexy anime characters in ‘Attack on Titan.’ She has a toned figure and has quite muscular features. She is one of the best soldiers and is an excellent weapon against the Titans. What attracts most people is her love for Eren.

Now, we have a serious diva. Revy is the sexy and ruthless anime girl from the ‘Black Lagoon’ anime series. She dresses with unbuttoned jeans, which are cut off to make shorts. A black crop-top covers her upper body revealing her navel. She wears a ponytail with bangs on her forehead. Her tan complexion complements the looks. Not much is known about her past or how she ended in Roanapur.

Bulma is one of the most prominent characters of the ‘Dragon Ball’ series after Goku. She was Goku’s first friend. Bulma is what is meant by beauty with brains. She is sexy and hot and sometimes uses her sex appeal to get what she wants. For instance, she lifted her skirt up for Master Roshi to get the dragon ball. She is currently married to Vegeta and is Trunks and Bulla’s mother. Yet she is one of the hottest anime girls there.

Rangiku Matsumoto is a name that says it has curves. She usually is curvy and built beauties from anime. Her most prominent feature is her enormous chest, which she keeps on the show by letting her robe hang loose. The beach episode of ‘Bleach’ gave us some great looks at her assets. She is a very skilled fighter and is the lieutenant under captain Toshiro.

Next is the sexy demon from ‘High School DxD,’ Rias Gremory. She is a well endowed and tall anime character. Her sexy figure allows her to be seductive at times. Rias wears the academy uniform, but sometimes we also get a glimpse of her sexy body when she wears some sexy lingerie. Rias is a pure-blooded devil. She was the one to reincarnate Issei after he was killed. She has strong affections for Issei.

If one asks you to nominate the sexiest anime girl characters in ‘One Piece,’ Nico Robin comes up in your mind. She is a very sexy and tall woman with beautiful long legs and slender arms. Nico often wears uniforms that show off her cleavage. She wears black hair and a tan complexion. Nico is the last survivor of her island ‘Ohara’. She also a member of the Straw Hat Pirates. Her long legs add to her fighting capabilities.

Well, that’s all from the list of sexy anime girls. We will keep curating such stuff for you. I hope you liked the list.

The Impossible Ending Explained: How Much Of The Story Was True?