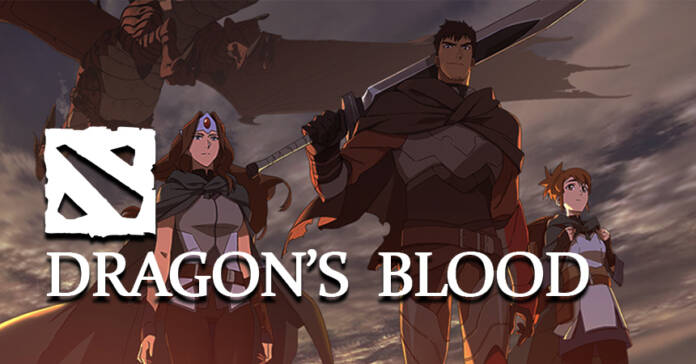 17th February, Netflix announced the release of an animated series based on the game DOTA 2 as DOTA: Dragon’s Blood, Here DOTA stands for Defense of the Ancients. They also released short clips of what the series would look like. Valve released a full-fledged trailer one week later, giving a brief introduction into the storyline and the characters. Without any further delay, here’s everything you need to know about DOTA: Dragon’s Blood.

The series premieres on 25th March and focuses on two main characters; Davion, the Dragon Knight, and Princess Mirana. The trailer also gave the viewers a glimpse into the animation style of the series. A Korean studio named Studio Mir was hired to produce the animation for the series. Some examples of their work include their animation of The Legend of Korra and Voltron: Legendary Duties.

A small introduction into the series tells us about the Dragon Knight’s mission to remove scrooge from the face of the earth.  However, upon encountering an ancient and powerful eldwurm and getting involved in the life of Princess Mirana, Davion now becomes entangled in events much more complicated than he could imagine.

Many fans of the game have expressed their excitement online regarding the release of the series. Based on a game (released in 2013), many have high expectations of the storyline and the characters. The slow revelation of cast members also created a buzz. Some noted voice actors include Yuri Lowenthal.

He is famous for his previous voiceover of characters such as Sasuke Uchiha in “Naruto” and Peter Parker in “Insomniacs take on Spider-Man.” Other notable voice actors include Josh Keaton, Lara Pulver, and Troy Baker. The cast has definitely increased expectations, and fans have expressed faith in the production of the series.

Netflix’s DOTA will be voiced in 12 languages

Additionally, DOTA will be subbed in 30 languages.

Premiering March 25th on @netflix, this exciting take on the Dota universe from @ashmasterzero (Thor / X-Men: First Class) is brought to life masterfully by @StudioMir2010 (Voltron / The Legend of Korra)https://t.co/p6y2eMXC8i pic.twitter.com/qWMPTSTMM6

Ashley is known for his work on Thor and X-Men.

Also, Ryu Ki Hyun will serve as a co-executive producer.

End of The Story

Given the popularity of the game, producers hope some of it trickles down to the series. The series will also be easily accessible to fans across the world since the streaming service is Netflix. With its release on 25th, we cannot wait to see the fans’ reaction whose favorite game has been transformed into a new world.