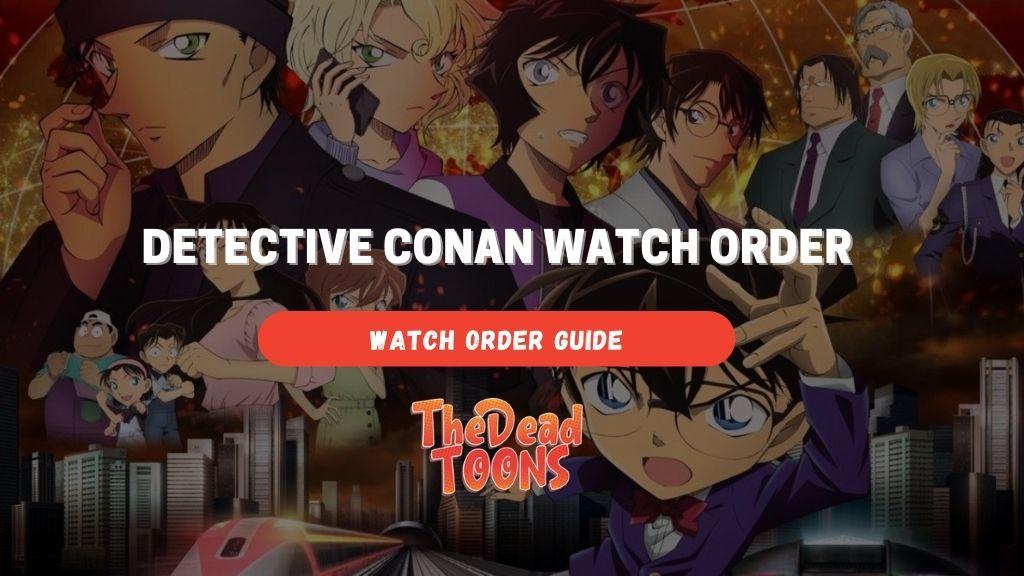 A milestone anime, Detective Conan is one long (very long) series. Premiering in 1996, the series has 1000 plus episodes, more than 20 feature films, and around 12 OVAs so far. As such, viewers all over are confused-how to go about the show? Even advance level weebs find Detective Conan’s long list of production a little mind-boggling. So today, we are here with ‘Detective Conan: The Best Watch Guide!’

Also known as Case Closed, the anime’s longevity is not actually that much of a problem. Once you are aware of the basic layout and essential characters, you can pick it up anywhere. Thanks to its “case of the week” format, Case Closed becomes a bit easier to go through. Nevertheless, we have listed a simple watch order for those who want to watch the show rigorously.

Out of the 1000+ episodes, many are filler episodes not taken from the original manga. If you want to keep up with the original storyline, you can skip these parts. However, these episodes (just like the whole show) are quite fun to watch. So, if you have enough time to spare or if you’re a big fan, you SHOULD watch these. Given below is the list of all filler episodes for the show.

Barring the fillers, the canon episodes are, more or less, important. As said above, if you are well informed of the essentials, you can pick up the anime anywhere; I would not recommend anyone to skip these episodes. These canon episodes are essential to the story of our ‘little’ high-school detective, Shinichi Kudo.

The series is quite long, and many movies and OVAs tighten things up a bit. So, today we are going to list down the order for all OVAs and movies. The list will be a bit long since there is so much to talk about. First up, here we are not counting Magic Kaito and Magic File. You can easily watch Magic Kaito after finishing the whole series, and as for Magic File, they are non-canon, so watch them as per whim.

Whew! That is one long list. The 23rd movie is the most recent one, and after this, you should start with episode 936. It sure looks like a lot to watch, but there is a catch to it. But before telling you how to go about these movies, it’s time to list down the OVAs.

So, How to Watch Detective Conan?

The easiest and most preferable method is to go for the canon episodes. You can easily swim past the fillers, movies, and OVAs and watch the original, straight out of the manga episodes. As we have seen with both old and new series, filler episodes can sometimes be a little off-beat (though Detective Conan has its fair share of good fillers), you can avoid them.

However, if you still want to watch it, I recommend watching the canon episodes first and then the movies, fillers, and OVAs. This way you can also save some time. Plus, it is difficult to watch the whole show legally outside of Japan. Even major platforms like Crunchyroll do not stream the whole series. Others, like Funimation, recently lost their streaming rights for the show.

Detective Conan is surely one long series. But if you have enough time on your hands (or if you are someone like me), you would honestly the fun detective story with a twist. So, with this guide, head straight on Detective Conan and have fun! And have you heard of Deku’s new quirk? If not then head here.

Tanishka Kashyap
Tanishka is a student at the University of Delhi with a keen interest in writing, art, and many other things. She is passionate about stories and loves all things anime and manga.
RELATED ARTICLES
Watch Order