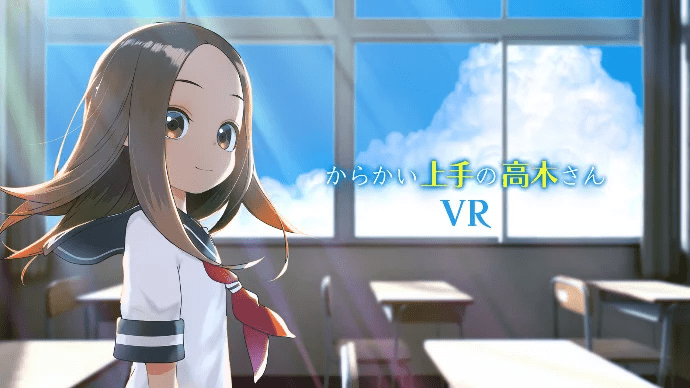 Teasing Master Takagi-san (Karakai Jōzu no Takagi-san) is a Japanese manga series by Sōichirō Yamamoto. It originally got published in 2013 in a monthly magazine. There is the number of adaption of the manga such as anime television series adaptation by Shin-Ei Animation; the Original Video Adaption, English manga adaption. The second season of the English series aired on July 7, 2019, its first season got aired on July 24, 2018. Takagi always teases her classmate named Nishikata; she loves to tease him. The series is the best popular romantic comedy exceeding 7 million series. Currently, three works are going on namely “Mr. Takagi as a good kid” (Shogakukan), “Kuchi no Tsubaki’s chest” (Shogakukan), and “Still come still” (Kodansha).

The campaign is going online on the official page of Makuake to raise 1.5 million yen for production of VR anime on Oculus Quest platform. This campaign is going to run until October 10, 2019. The virtual reality anime will put players in the viewpoint of Nishikata, the one teased by Takagi. It would be recreating notable scenes from its original manga. The Oculus Rift platform will allow players to join Takagi in the activities like going home from school or going to the beach.

Plunderer Episode 21: What Will be the Result of Hina...

The Night Beyond the Tricornered Window: Release Delayed!

Desert Punk Manga To Reach Its Conclusion This October