With the rise in fame and popularity of Japanese mangas and animes, it is as if slowly but surely the Japanese entertainment industry is vying to take over the world. A proof of which we got to see quite recently in the Tokyo Olympics when The Greece gold medalist struck the iconic One-Piece Luffy’s pose upon winning the first position in one of the biggest sports tournaments in the entire world. However, no one expected that an anime could ever end up inspiring someone to save a life. But sometimes least expected can occur.

Mr. Sakuramasa Kawazu, an 18-year old teen inspired by a firefighting anime saved a life. Though he didn’t state which anime was it we believe it to be Fire Force. As the incident that occurred was related to fire. In every situation, with a calm mind, one can do anything, and that’s what Kawazu said. He first observed the situation and acted accordingly calmly.

Fireforce is an anime about the firefighting department. How they act, what are their reaction and what they do to control a fire and prevent it from spreading. The first action they do is to observe the situation calmly and to prevent the spread.

At midnight on August 29th, while going home from a convenience store Kawazu discovered a fire in his neighborhood. The door of a wooden two-story building had caught fire. The residence was a 70-year-old lady who was about to sleep.

On noticing the fire Kawazu contacted the fire department and when they arrived along with the officer he pounded the door and made the old lady aware of the fire. Since the fire was not so big the lady herself was able to put it out. This incident happened in Uehonmachi, Kagoshima City.

Mr. Kawazu was then honored on September 29th, 2021 by the Fire department and the Chief. Kagoshima City Central Fire Department presented him the letter of appreciation to report and help limit the spread of fire. The fire department acknowledged him to be the first to discover the fire. The Central Fire Department held the Presentation Ceremony where Kawazu thanked his quick and calm thinking.  Hopefully like this young teen, all of us can take inspiration from our surroundings as well and be the epitome of responsible citizens. 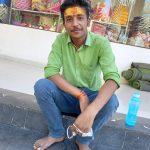