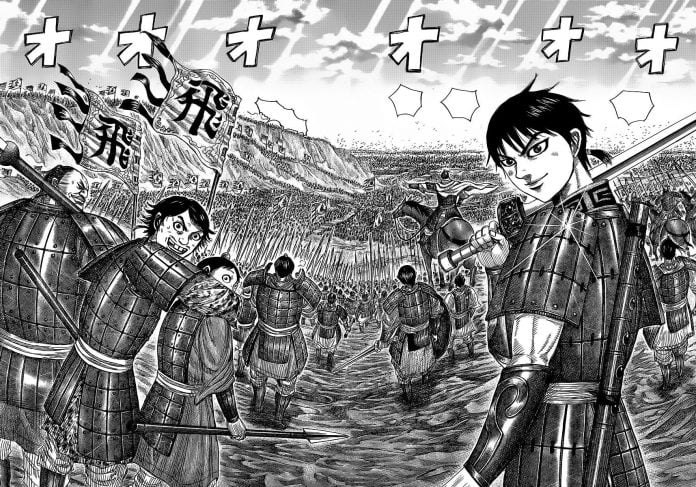 It’s almost time for the release of the upcoming 65th chapter of the manga Kingdom. The events in the last chapter we quite exhilarating. And the ending of the chapter definitely left us all at a cliffhanger. The fight between Moubu and Man’U is getting intense.

Are there any chances by which Man’U will be able to win this fight? Well, to find that out, we have wait till the release of Kingdom Chapter 659. This article brought all the insider information and some major spoilers on what will happen next.

So here’s everything you need to know, from release date to recap of chapter 658 and more.

The next chapter of the manga Kingdom is all set to release on Saturday, 31 October 2020.

From now onwards, there is a slight change in the release schedule. New chapters of the manga will now release on every Saturday starting from this week.

The manga is officially available on VIZ Media, and for more details and updates of the manga, don’t forget to visit the official website of Shueisha’s Weekly Young Jump.

The previous chapter of the manga left us all at cliffhanger. Keeping because of the past events, where it seemed almost impossible to invade Juuko’s fort, there is a possibility that this will change. As per Wei’s siege, they will invade the fort and take charge. This means that there is going to be a fall for Juuko. But is it that easy to make Juuko fall? Definitely No! So there is going to be a huge twist to handle the situation.

Meanwhile, in the backdrop of the manga, Tou will have a faceoff with Juko’ou. Is it possible that Juko’ou will die in the next chapter? Well, maybe or maybe not. However, the chances of Tou overpowering Juko’ou are more because he is the great general, and also, he is so much more stronger than Juko’ou.

Hakurei is also trying to hind Tou while he is busy fighting Juko’ou. Hakurei plans on taking control over the HQ. If this happens, things will change drastically in the upcoming episodes.

Moubu vs. Man’U arc is one of the main attractions of the manga. As well know that the climax of the manga is nearing in the upcoming chapters. Man’U is the greatest fighters ever gets knocked off his horse by Moubu. Moubu is definitely giving him some really tough fight.

Moubu is dominating Man’U, causing him to lose his powers and strength. Will Moubu let go of Man’U, or will he kill him? Who among both of them will win? I guess we have to wait for Kingdom Chapter 269 to know all this.

One Piece 987: Will Kaido Die Or Turn Into A Dragon?

Attack On Titan: Premiere Date For The Final Season Set In...

Rent A Girlfriend Episode 10: Kazuya And Ruka On A Date!