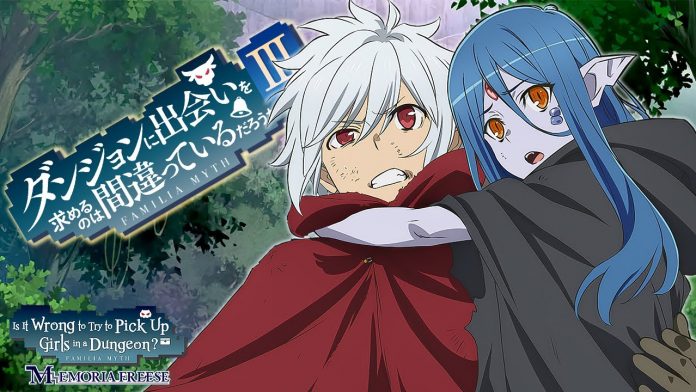 Talking of the previous episode of the anime, Is It Wrong To Try To Pick Up Girls In A Dungeon?: Wiene starts trembling as she sees the elves and the evil humans fighting. Elves, along with the help of the Monsters, try taking the humans down. Meanwhile, a human tells Dix about the bull monster. He is one of the most powerful monsters that they are going to face.

Dix stands up to fight Bull. The Bull attacks, but in defense, Dix stabs in the back him using his spear. Seeing this, an elf shouts,” Foh,” referring to the Bull. Bulls fall onto his knees while spitting blood. Dix and his crew kill more than half of the monsters and elves. Wiene cries for Foh, while Dix says no to cry as she is the next one getting killed. Meanwhile, in the backdrop of the anime, Bell worries about Wiene.

What will happen next? Is Wiene going to get killed? To find that out, we have to take a little sneak peek into the updates of the next upcoming episode of the anime. Is It Wrong To Try To Pick Up Girls In A Dungeon?.

“Is It Wrong to Try to Pick Up Girls in a Dungeon? III” Episode 6: Release Date

Every Saturday, a new episode of the anime is released. And this week also like always. The new 6th episode will release on Saturday.

The anime “Is It Wrong to Try to Pick Up Girls in a Dungeon? III” is officially available on Crunchyroll.  Before we head on to the upcoming episode’s spoilers, let’s take a quick recap of the previous episode of the anime.

After the defeat of Bull Monster, Dix puts Wiene to sleep. Meanwhile, Dix’s righthand starts kicking an elf spider girl, to which Dix asks him to stop this dawdling. The spider, The elf spider girl tires, to send Wiene to back to safety using her silk but fails. Dix notices this and cuts her spider silk.

Some stupid men, along with the henchmen, tries to romance the girl before killing her. To defend herself, she spits the spider venom. She blows down men in a single hit. She destroys a crystal that she takes it out of her body while signaling Gross to come.

When Gross arrives there, all he can find is the dead bodies of his allies. Meanwhile, while heading back to the dungeon, Bell thinks that he will not kill monsters for money from now on. He feels that Xeno, Lyd, and Wiene are good monsters.

All Bell hopes is to find a way to make peace between monsters and humans. Meanwhile, in the backdrop of the anime, we see monsters avenge their allies’ death start killing humans in the city. Dix holds Wiene as a hostage.

Ghost-busters returns to haunt you