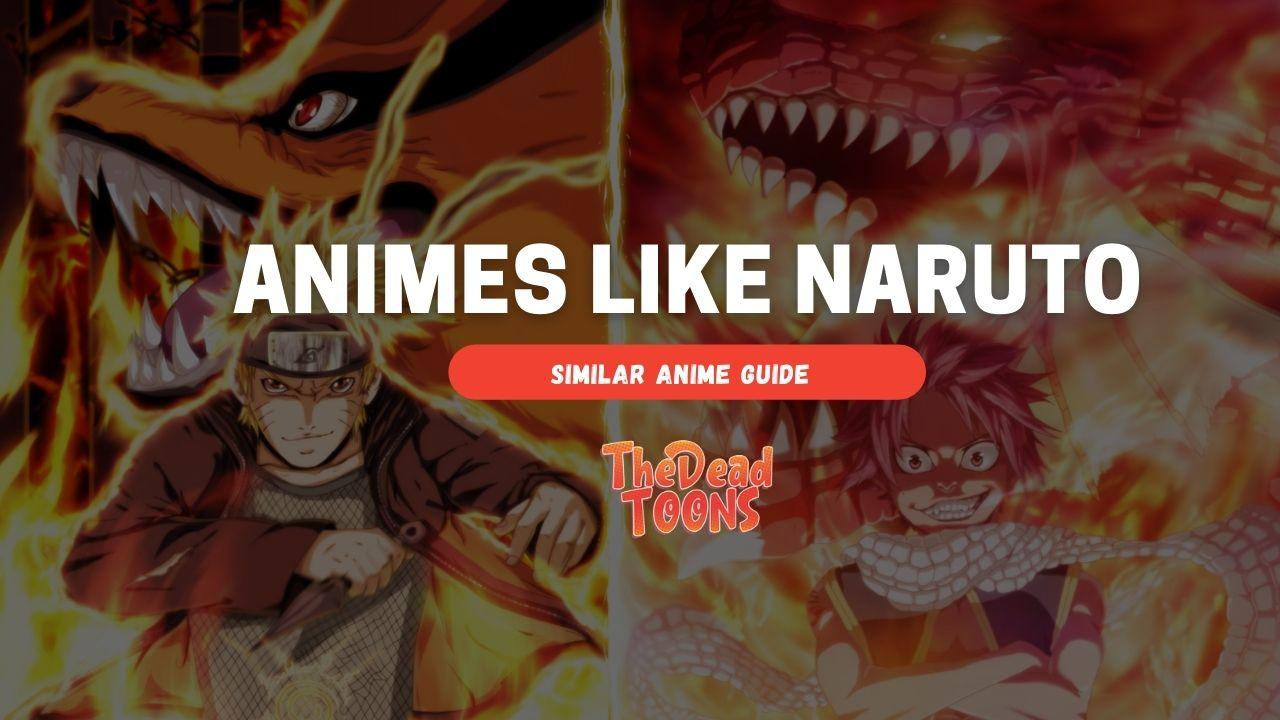 If you’re a new anime fan, an established otaku, or a growing fan, you have most likely already heard of a milestone in the anime world- Naruto. A widely known Shonen anime, Naruto remains to be a source of entertainment and inspiration for viewers even today, after the airing of its last episode in 2017. Here, we’ll be looking at the top 10 animes similar to Naruto.

Naruto tells the story of an orphaned boy who beats all the odds in his life, proving the scathing scrutiny everyone chucks at him, slowly climbing the ladder of power in a highly unstable ninja world. While he grows as a human, he faces challenges all around him in his relationships, his own emotions, and the very world he lives in. Viewers were captured by his tenacity and the philosophical elements of the show, along with the magnificent and vast ninja world, with all its political complexities and power ranking. The interactions between characters and gag moments in the show also helped increase its popularity. 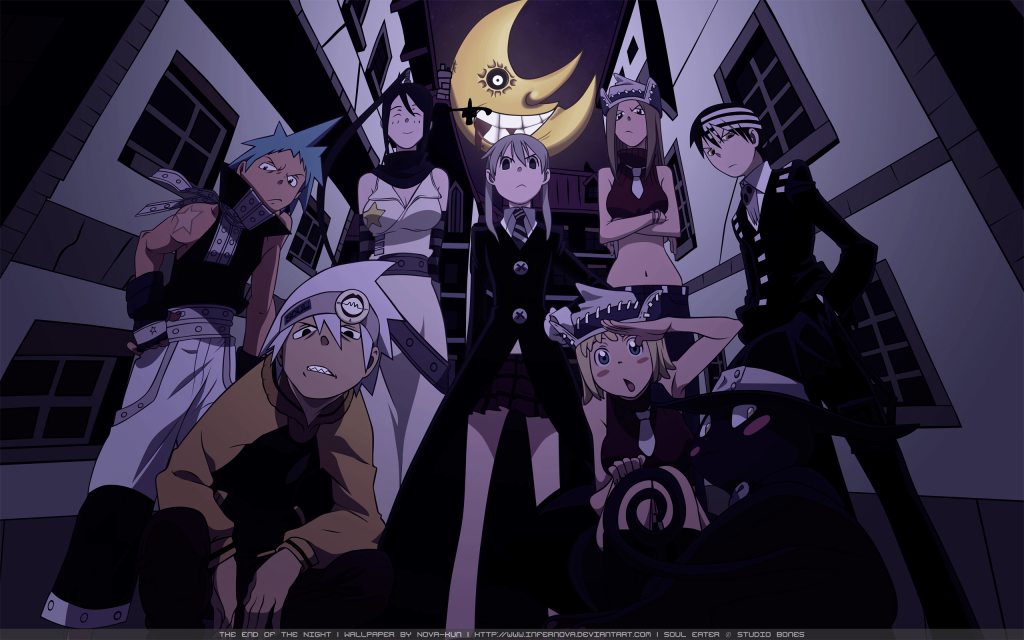 This anime shares similarity with Naruto in that it follows a few youngsters trying to learn about their powers, as they fight many souls, protecting Death City from many threats.

We follow the lives of demon hunters who, with their partners that can turn into weapons, are tasked to work together, to defeat the demons trying to take over the world. Maka and her weapon, Soul Evans, work with the son of the Shinigami, Death the Kid, wielder of the twin pistols Liz and Patty, and Black☆Star with his partner Tsubaki, who can transform into a variety of weapons. We follow their adventures in this anime with an unconventional art style, and energetic characters, as they try to prove themselves in Death Weapon Meister Academy, headed by the Shinigami- Lord Death himself.

This show is for you if you’re looking for something shonen and action-filled, it is a great watch, with entertaining action sequences, and a group of lovable characters, this anime deserves your watch. 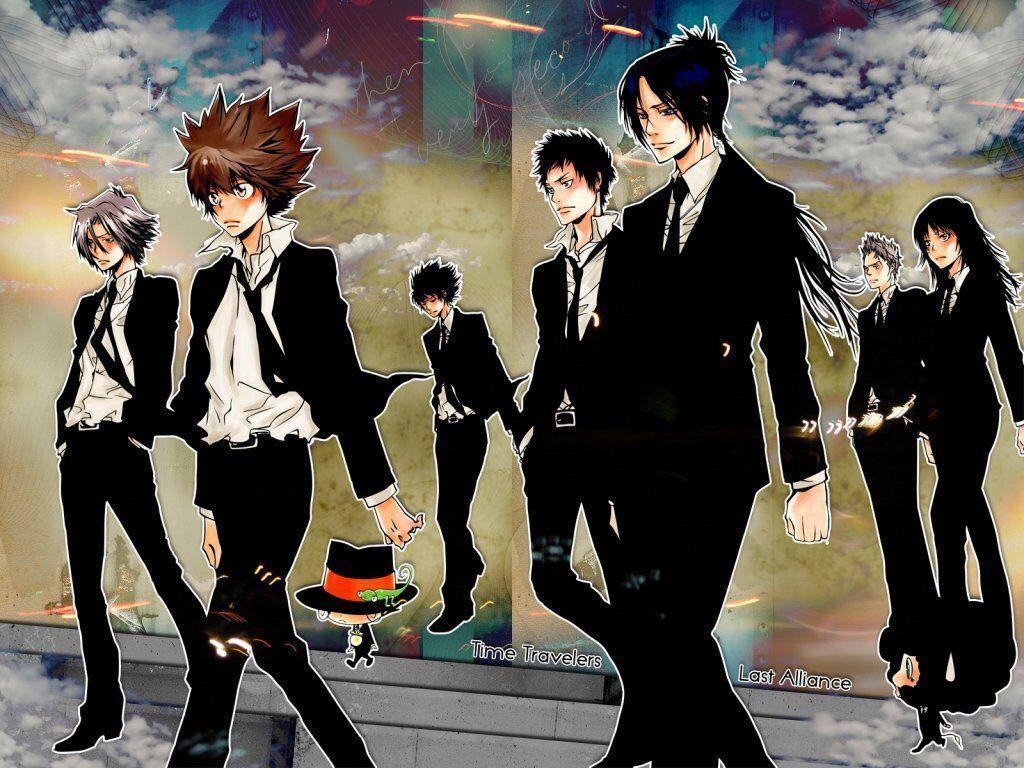 Clumsy and talentless student Tsunayoshi Sawada is dubbed “Loser Tsuna” by his classmates. He has a crush on the school idol Kyouko Sasagawa, someone with who he cannot even dream to be. However, after meeting a baby hitman, Reborn, his life is turned upside down. He must take over as the leader of the notorious Vongolo family, a part of the Italian mafia.

This anime holds ties with naruto in the growth of its initially useless character, into a powerhouse. The gradual defeat of opponents and taking up challenges leads to some great character development, and the anime, while not as serious as Naruto, is a Shonen anime with some great characters. 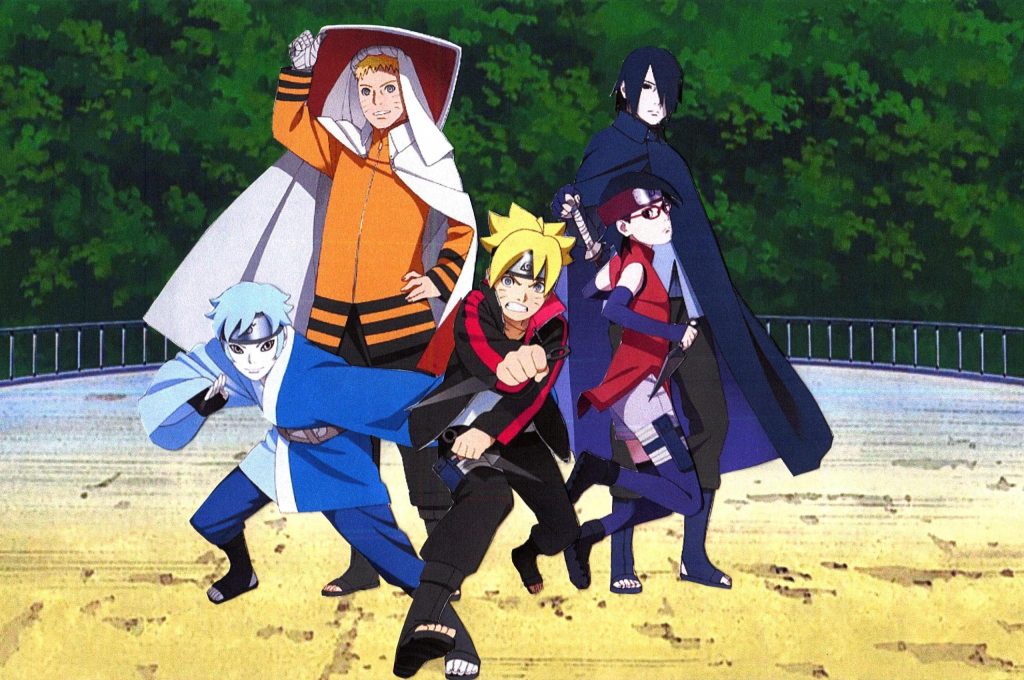 Boruto picks up after the end of the fourth Shinobi World War, telling the stories of the new generation of ninjas in the world we have all come to love. This time, we follow the adventures of Naruto’s son, Boruto. After the conclusion of the war, the Shinobi world has seen some rapid changes, becoming more like a metropolis.

Under the leadership of Naruto and the other Hokages, peace and prosperity have returned. Boruto is considered a prodigy by many, and this has made him quite arrogant. Coupled with this is his annoyance towards a father he thinks doesn’t spend time with him. With a threat from another dimension suddenly looming over their heads, and the ninja world at risk once again, how will our heroes protect themselves?

Ukyō Kodachi, a former assistant of the author of Naruto, Masashi Kishimoto, works with Masashi as the Mangakas of Boruto, so a lot of the emotions and writing style is similar in the two shows. 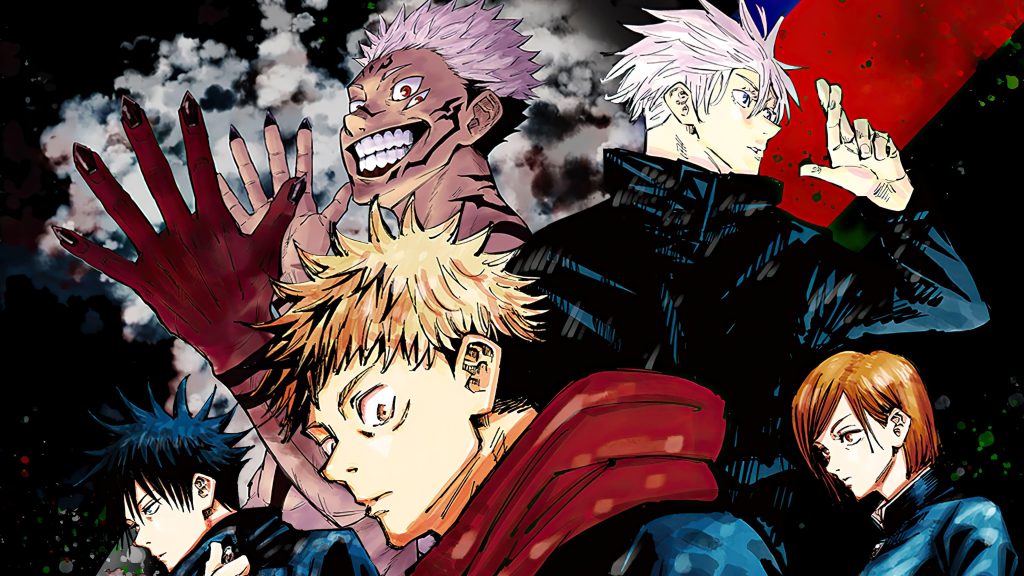 Yuuji Itadori and his friends at the Occult Research club usually waste their days away theorizing about absurd paranormal activities, until one day, they find an actually cursed item. While Yuuji is off visiting his sick Grandfather, he is visited by Megumi, a student at Jujutsu Highschool, inquiring about the cursed item, a finger. At the same time, Yuuji’s friends are performing a ritual on the finger. With curses attacking students all over the school campus, Yuuji decides to eat the finger in hopes of countering the curse, an act that gives him great power.

He is able to quickly take care of the curses haunting his school. However, he is now wrenched out from his normal life, entering a dangerous world of curses. Considered a threat to the world, Yuuji soon realizes the consequences of his actions, and must now train hard and strong with the others at Metropolitan Jujutsu Technical High School.

Jujutsu Kaisen amassed widespread popularity very quickly, and most of it had to do with the extraordinary work of animation in the show. The action scenes are absolutely fantastic and a feast to look at. The story is entertaining and the characters, playful and jolly in the dark setting. 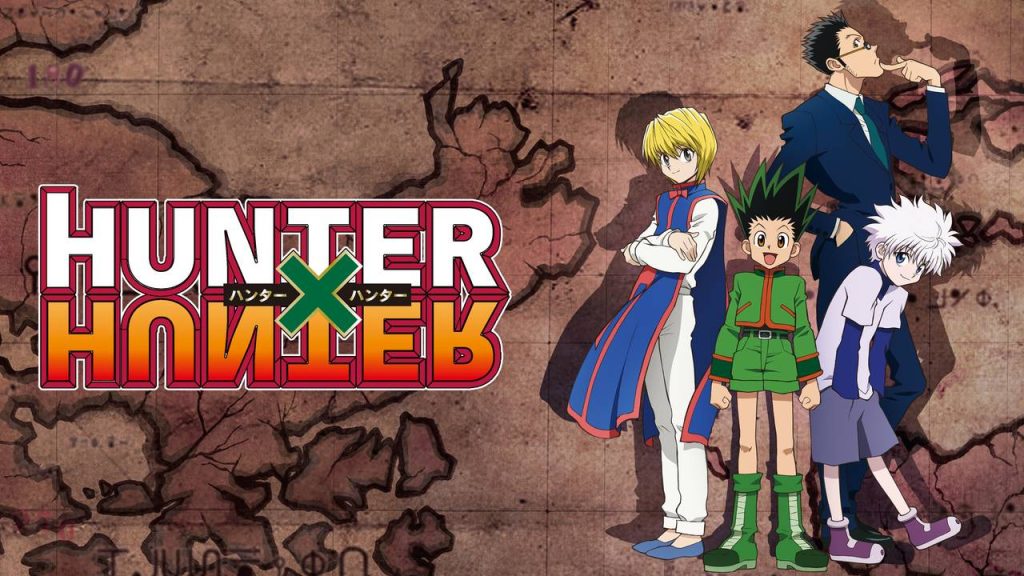 While Naruto had powerful ninjas and a world filled with rich history and power scales, HxH has its hunters, with exemplary strategic and physical skills. The exam arc in HxH shares similarities with the chunin exam arc in Naruto. Both the main characters have massive goals that they wish to achieve- Naruto wants to become Hokage, and Gon wants to meet his father, Ging, who is almost impossible to trace.

Hunter X Hunter follows the story of four people from completely different backgrounds and goals coming together in hopes to become hunters. They must undergo rigorous training and pass a very tough exam, to finally be hailed with the title of “Hunter.” 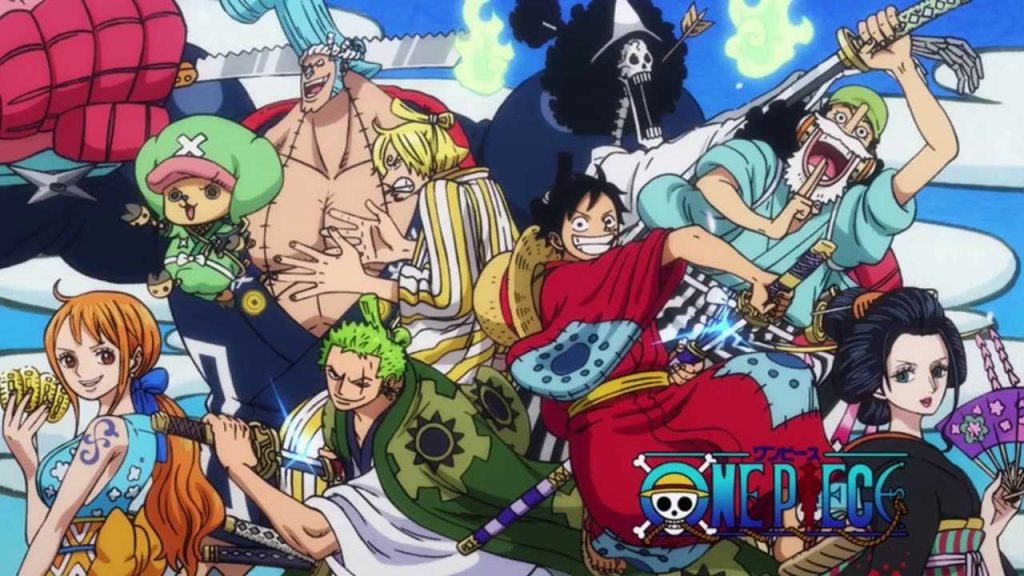 Both, Naruto and One Piece were pillars of Shonen Jump while they were being serialized, and both are animes with a large fan base. One piece introduces us to the world of pirates, a world of intrigue filled with danger, but leading to great heaps of treasures and power. The main character, Luffy, is a goofy and fun-loving kid like Naruto, with dreams of becoming the best pirate someday. the vastness of the worlds, diverse characters, and exciting story arcs make it similar to Naruto

After the capture and execution of the “Pirate King,” Gol D. Roger, his last words send a wave of shock and wonder throughout the world, he revealed the existence of the greatest treasure ever, One Piece. In the search of this fabled treasure, that provides an endless supply of riches and fame, many people head on to become pirates. One such person is a bo name Luffy, who wishes to explore the entire world and he is intrigued by the absurd adventures and people that can be found in the world of pirates and sets forth to become one himself. Helping him, are his friends and crewmates, along with his ability to stretch his body. 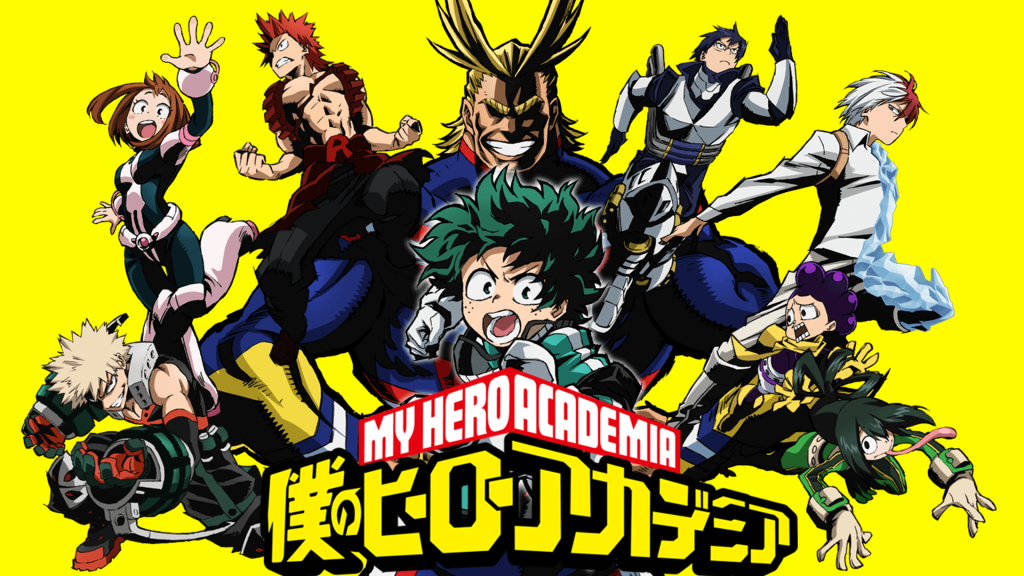 MHA takes us for a dive deep into the world of heroes. We’re brought to a world where 80% of people have “quirks” or superpowers. Many of these people use their powers for good, becoming heroes and protecting people from injustice, others decide to take darker routes in the use of their powers. At the same time, we have other people.

We meet Deku, a kid who, like many others, doesn’t possess a quirk. However, he has a great intrigue for the superpowers and has always learnt and noted everything he could about them. However, a chance meeting with his idol, the number 1 superhero All Might gets him close to the hero, who chooses the quirk-less Deku as his successor. Will Deku be able to finally live his superhero dreams?

Needless to say, MHA is alike Naruto in the high hopes and dreams of the main character, who is let down and taunted by most people. The vast world and its nuances are exciting to view, and the mystery surrounding a Villain Organization keeps you hooked. The cast is an ensemble of many kinds of people, and make for an entertaining watch. 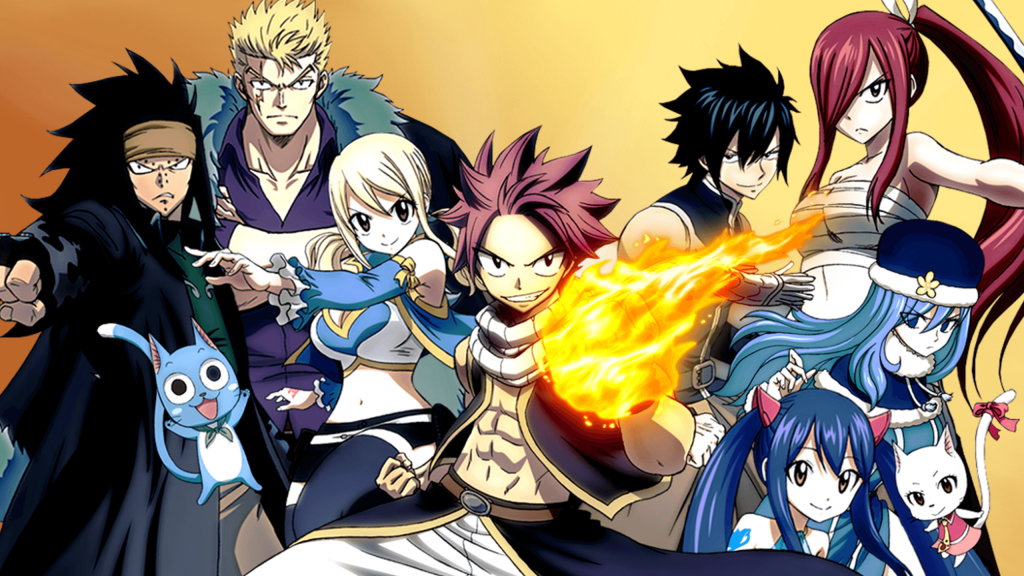 Yet another marvellous anime that received lots of fame is that of Fairy tail, following the adventures of mages. The world is vast and awe-inspiring, with many characters to fall in love with, and numerous exciting adventures.

Lucy, a young mage with hopes to become a wizard n the guild Fairy Tail, ends up meeting Natsu, a member of the guild, who protects her from a kidnapping. The members of the guild are powerful and friendly, treating each other like family. As the story continues, we’re taken on a world of exciting quests in the land of Fiore. 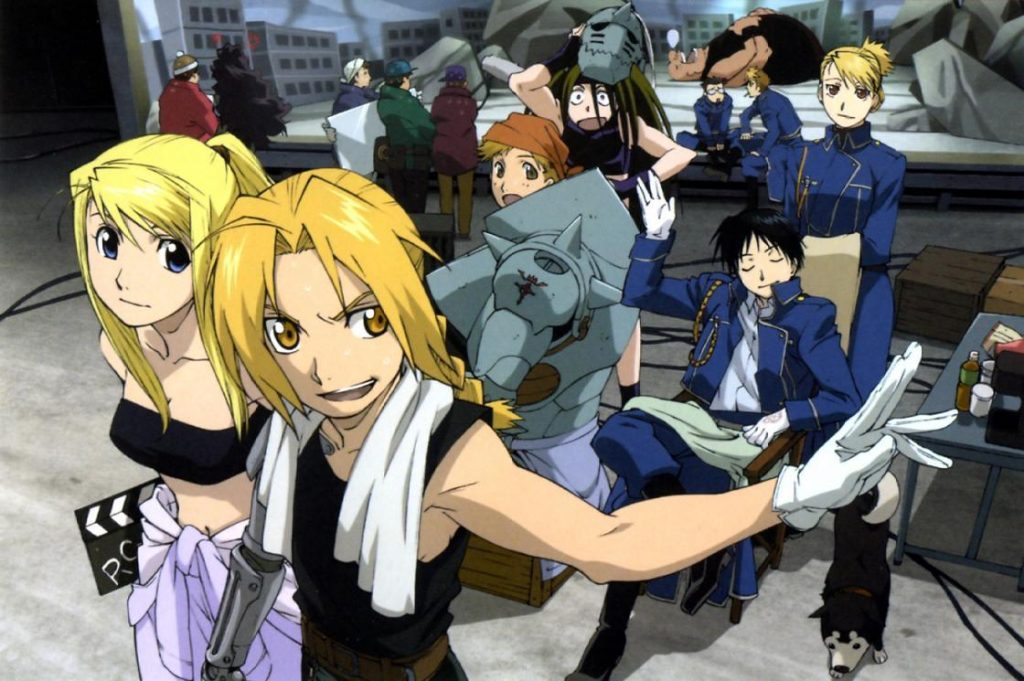 This anime is darker and more serious than Naruto, yet has its light-hearted and comedic moments from time to time. The wide range of characters are interesting to look at, and the character development is like that of Naruto. Both animes occasionally take on philosophical routes, which connects the audience more to these characters.

Edward and Alphonse Elric are devastated b the death of their mother, and try to make use of a forbidden form of alchemy, human transmutation, to revive her back. However, the experiment goes entirely wrong, as they create a horrific mass human-shaped mass. The result of such alchemy would mean losing something of equal value. Edward loses and leg, and Alphonse, his entire body. Desperate to protect his brother, Edward gives away his right arm to affix Alphonse’s soul to a suit of armour. Now the two begin making use of their alchemy for the good of people and creating contacts in hopes of getting the Philosopher’s Stone, a fabled material that could help them get their bodies back. 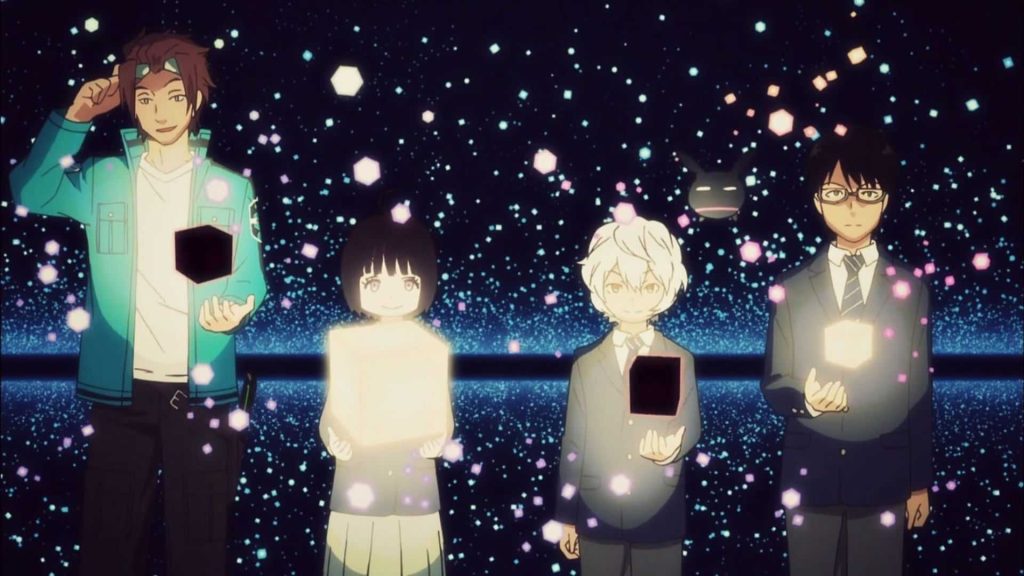 World Trigger shares a similar theme with Naruto, just with a bit of sci-fi mixed in. While the art of this anime is not the best, it has a good story to make up for it. The story revolves around an organization called the Border Defense Agency, created to fight against strange creatures called “Neighbors” that pour into Earth from a mysterious gate that opened up in Mikado City. While normal weaponry seems to be useless against them, Neighbors can be defeated using “Triggers.”

Osamu Mikumo, a part of the organization is still training in school to use a Trigger. While students are not permitted to use their Triggers outside the headquarters, Osamu is forced to do so when he sees the new student being taken to a forbidden region by bullies and Neighbors begin to attack them. Much to his surprise, the new guy is proficient enough to take down the Neighbours. Upon being questioned, he reveals that he is actually a Neighbour in disguise.

Naruto is a series that anime fans can never forget. It was the first anime for many fans and a gateway to the world of Shonen Jump. An entertaining classic that continues to be a major influence on social media, it introduced us to many characters. While the attachment to characters and story cannot be replicated by any other anime, we can create new bonds, immerse ourselves into fresh stories and new characters.