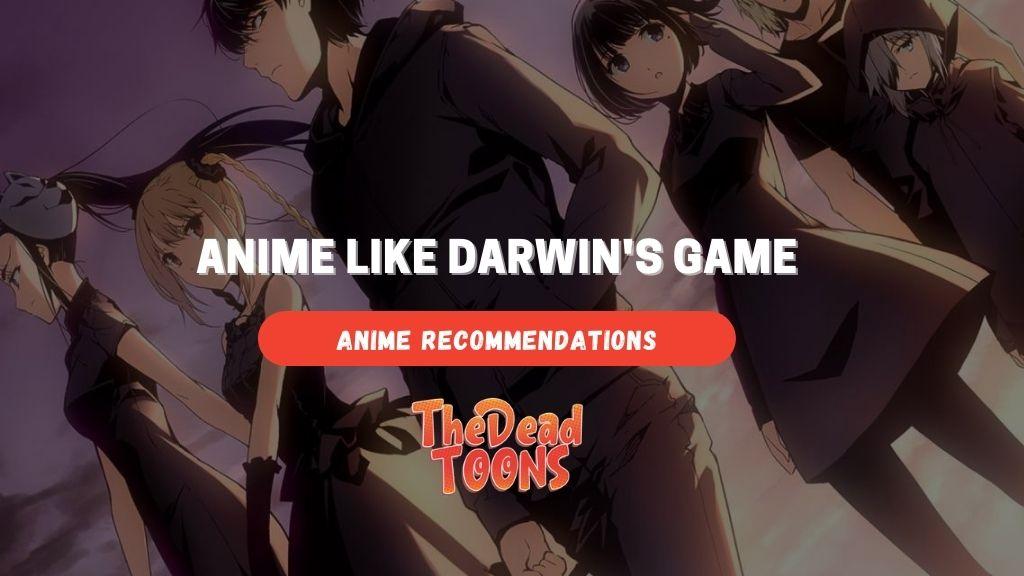 Darwin’s Game is an anime that takes an interesting concept and gives it a dark twist. Watching a deadly game come to life was scary and very entertaining. It follows the story of Kaname Sudō, who is trapped in a deadly mobile game. Here are more anime like Darwin’s Game.

Yukiteru Amano is a lonesome high school kid who spends most of his time writing a diary on his phone. He has no friends except two imaginary ones- Deus Ex Machina, a God of time and space, and the God’s servant, Murmur. Yukiteru’s life is completely changed when Deus reveals that he is a real entity. He gives Yukiteru a “Random Diary” that shows him his future. However, he is also forced into a Battle Royale with 11 other contenders with powerful diaries of their own.

Yukiteru learns that the winner of the battle will be made the new god of time and space and begins his quest along with an obsessive stalker, Yuno. Yuno also has a diary but seems to have a deep urge to protect Yukiteru. However, as he gets to know her, Yukiteru sees a side of Yuno that is darker. What is her plan? The anime has a few filler episodes, that you can find here.

Ryouta Sakamoto is unemployed and lives with his mother. While he hasn’t had many achievements in his life, he is Japan’s top player in an online game, Btooom! His ordinary life is upturned one day when he finds himself on an island with a green crystal embedded in his arm.

He discovers that he is in a real-life remake of his favourite game and must fight against seven other players stranded on the island to return home. He teams up with a fellow player, Himiko, and the two try to make it out alive while slowly uncovering a mystery surrounding the game.

While Shuuichi Kagaya seems like an ordinary high schooler, he actually has a mysterious ability to turn into a monster. He has no clue why or how he has the powers. One day, upon witnessing a building fire, he saves a girl trapped within it, leaving his phone inside. The girl, Claire Aoki, comes searching for him the next day.

After confronting him about his abilities, Claire realizes that Shuuichi has no knowledge of his powers. She tells him that she has been searching for her sister, a monster just like him, for a long time. Shuuichi decides to help her and find out answers for his own abilities, but the pair soon learns that they aren’t the only ones in the pursuit of this knowledge.

When Nobuaki Kanazawa transfers to a new school, he lives a lonely life, not making any friends. Rather than a situation, it’s his choice not to get close to anyone. This choice soon becomes apparent as everyone receives a text from “The King.” Soon, all the class members are stuck in a deadly game. Anyone who refuses to play or even leaves midway receives a fatal punishment.

Kanazawa, having played the game already before, tries to warn his classmates. He has already seen many of his friends die in the past. With a puzzling and horrifying situation in front of them, how will the class survive?

Haruyuki Arita is an overweight kid bullied and ridiculed by many of his classmates. He finds solace in his life by playing online video games. He is shocked one day to find out that all of his high scores have been beaten by the vice president of his school’s student council, Kuroyukihime. She introduces him to a program called “brain Burst.” It enhances the brain waves of its user to such an extent that time seems to slow down for the person.

Moreover, the programme creates an augmented reality fighting game consisting of points. Upon losing all points, a person can no longer use the Brain Burst. Kuroyukihime tells him that she needs his help to meet the game’s creator and determine why it was made. In exchange, she plans to help him deal with his bullies.

Makoto Naegi is accepted into an elite school, accepting only the most talented students. Every student has a unique title corresponding to their talents. While Makoto seems quite ordinary, he is admitted in and receives the title of “Super High School-Level Luck.”

While he and his classmates are very pleased to get into such a prestigious school, their joy is short-lived. The school principal locks all the students within the school, and the only way the students will be allowed to leave is if one of them commits a murder without being discovered. However, if the killer is caught, they will be executed, and the game will continue. Trapped in such a bizarre situation, how will Naegi escape?

This one is a dark, psychological thriller. Ritsu Shikishima has always been interested in psychological and philosophical questions. He likes to ponder on them during his free time. His life is a peaceful and ordinary one. However, it soon begins to unfold with the rising popularity of a new pop idol, μ, whose voice turns Ritsu’s friends and families into monsters.

Ritsu soon realizes that he is trapped in a virtual world created by μ. The anime follows his quest to try and gather other players like him, also stuck in this world. They must work together to survive with the help of their newfound powers.

This anime follows a battle royale setting, and the story revolves around Shiro Emiya, a boy who lost his parents in a massive fire. He was taken in by a retired mage who took care of him for many years. A few years after the mage’s death, Shiro, who has grown up to be an honest and hardworking teenager, is forced into the Fifth Holy Grail war. A war whose winner will be granted any wish.

Many fans consider this anime as the best battle royale anime. It is similar to Darwin’s Game, as it follows a protagonist who unwillingly participates in a competition of death. It is a story about the struggles, relationships and survival within the race.

This anime takes place in N-city, where girls love to play the social role-playing game called Magical Girl Raising Project. Koyuki Himekawa is a girl who has also found passion in this game, as it lets her feel like a magical girl herself. Her life is turned upside down when she is given the rare offer to become her in-game avatar, and thus, a real magical girl.

She starts out helping many people in need until she receives a message that says that the admins wish to reduce the number of magic girls. Every week, a magic girl with the least amount of Magic Candles- awarded for every magical girl activity, will be eliminated. The girls also realize quickly that the game has horrifying real-life consequences and isn’t all fun.

Saki Morimi gets into some unexpected troubles on a trip to America and is saved by Akira Takizawa. He is cheerful but odd- completely naked and suffering from amnesia. He believes he is a terrorist and has a cell phone with 8.2 billion yen in digital cash.

Despite his peculiar behaviour, the two become friends. However, this friendship changes Saki’s life forever, as she is soon thrust into a death game filled with thrills. The man shrouded in mystery has something to do with this suspenseful game, filled with cellphones and money. While his memories begin to return gradually, he begins to piece a puzzle of his past, which seems to have links to accidental missile strikes in Japan from a few months back.

Sanket Palwe
Sanket lives in Pune, India. He knows his non-mainstream anime just as well as he does the popular ones. He is a true-blooded otaku and has a deep interest for everything psychology and Japan.
RELATED ARTICLES
Find Similar

Animes Similar To Made In Abyss

Animes Similar To So I’m A Spider, So What?