Animes Similar To Attack On Titan 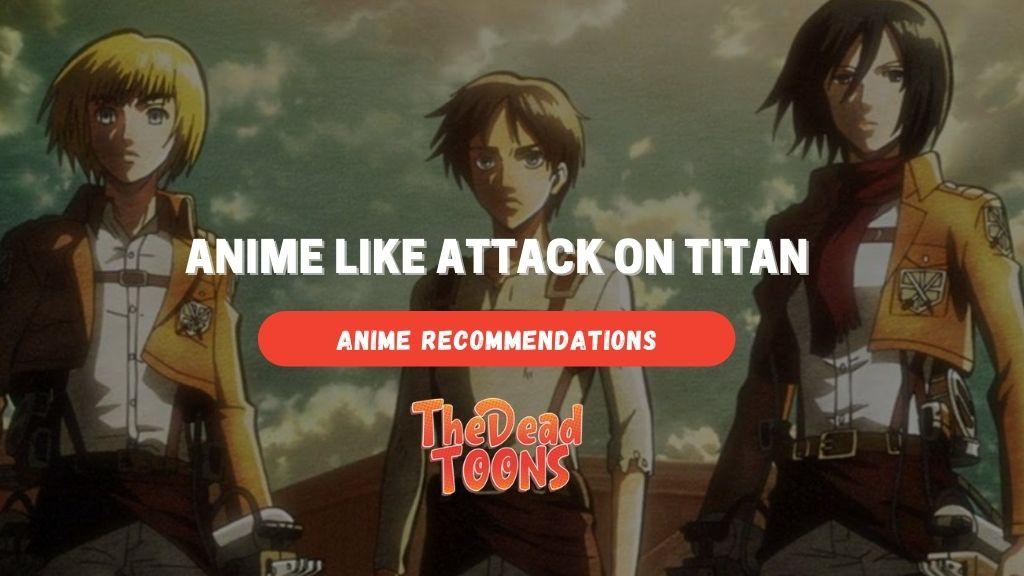 Attack On Titan always manages to win over our hearts and minds. Every new season makes the highlights all over social media, and Twitter is stormed by ecstatic fans waiting to discuss the latest episode. With the manga concluded and the anime soon to come next, we will definitely be left with a hole in our heart after Attack on Titan gets over. Here are the top ten animes similar to Attack on Titan.

Edward and Alphonse Elric are young brothers that live in a world where the science of Alchemy is possible. Alchemy deals with the changing of matter to form something different. However, it is governed by the Law of Equivalent Exchange- to gain something, something of equal value must be lost. The young boys are devastated after losing their mother and try to bring her back through human transmutation. But, unfortunately, they find out the hard way why it is a forbidden form of alchemy.

As a result of their experiment, Edward loses his left leg and Alphonse his entire body. It is only after Edward sacrifices his arm that he is able to affix Alphonse’s soul to a suit of armour. With hearts filled with regret, the boys become part of the State Military, where they are free to search for a fabled artefact called the Philosopher’s Stone that would allow them to get their bodies back. However, they aren’t the only ones in search of the stone.

Fullmetal Alchemist: Brotherhood is considered to be the closest anime to Attack On Titan by many fans. Make sure you watch the remake of 2009, not the original of 2003 (which is excellent in itself, but with a different ending from the manga.)

Meet Madoka Kaname. She is an average middle school girl living a regular life. However, everything changes one day. While she is with her friend, Sayaka Miki, she meets a cat-like creature, Kyuubey. He offers them a deal- He will grant any one of their wishes, and in exchange, they will have to become magical girls capable of achieving all their dreams. However, the new transfer student, Homura Akemi, tries to stop Madoka from agreeing with such a contract. She says that everything isn’t what it appears to be.

This anime is similar to Attack On Titan because of its intense actions sequences and, believe it or not, its darkness. The series title and first few episodes are only a misdirection, and the actual show is a dark psychological thriller.

This anime tells the story of a young boy names Allan Walker. He is a member of an organization called “The Black Order.” With his comrades at the order, Alen must protect the world from the evil-doings of Milenium Earl, who seeks to destroy all the fragments of “innocence” spread across the globe. An “Innocence” is capable of bringing harm to Earl, as well as his army of “Akuma,” that are created by the souls that are called back by their loved ones.

When the souls are tethered to an Akuma, they can’t escape. However, the Akuma can be destroyed by using “Innocence.” The Black Order was formed to stop Earl, and now, Allan and his friends must use their weapons to protect the world from harm.

Living in an old rickety building in Akihabara is Rintarou Okabe, with his friends and lab members. Okabe is a self-proclaimed mad scientist obsessed with creating prospective “future gadgets.” The closest they have come to making an actual invention is their phone microwave, which turns bananas into a pile of green jelly. While this was a peculiar event, it was far from any sort of scientific breakthrough.

Or that is what they think until they find themselves surrounded by a mysterious string of events, revealing to them that their microwave is an unusual time machine, capable of altering the flow of history, and in turn, changing the present and future. This anime’s take on time travel is very original, and comes closest to Attack on Titan in terms of the cliffhangers and the psychological thriller aspects of the show.

The story of this anime is set in the year 2021, where a deadly virus called “Gastrea” infects humans and turns them into monsters. The remaining forces of humankind are forced to live behind walls of Varanium, the only material capable of hurting the Gastrea.

The only hope humanity has of fighting against them are the “cursed children,” girls whose bodies contain small amounts of the virus, granting them superhuman abilities. They are called Initiators. The initiators are sent out on missions with a promoter to protect them, and the teams must keep the Gastrea at bay. We follow the adventures of Enju Aihara, an Initiator, along with her Promoter, Satomi Rentaro. This anime has a dark theme like Attack on Titan and a similar plot of humans stuck behind walls.

Dr Kenzou Tenma is an elite neurosurgeon, well known for his performance. He has a bright future ahead of him, being married to the daughter of the hospital’s director. However, he lives under regret of an incident when he chose to perform surgery on a famous performer. As a result of his choice, a poor immigrant worker is left dead. Tenma’s conscience doesn’t let him live with his decision.

As a result, when he is faced with a similar situation again, Tenma prefers to do surgery on a young boy, Johan Liebert, instead of the town mayor. A choice that costs him his job, social standing, and much more. However, soon the director and two other doctors end up mysteriously dead. Tenma’s position is subsequently restored as the hospital director. Nine years after these events, he once again meets the person he had saved years ago, who has now become a monster.

Follow the adventures of Guts, a man sentenced to death with a dark destiny. Demons will haunt him till his last day. In order to challenge his fate, he decides to take up the massive iron blade, Dragonslayer, meaning to exact revenge on the friend that he once looked up to.

On his journey of revenge, he finds an unusual crew of misfits: puck, a tiny elf, and Isidro, a thief who wishes to learn swordsmanship from Guts. However, the group will have to get stronger, as they experience danger that neither has ever seen before. The anime has a very dark theme, and while it is not very highly regarded, the manga is considered one of the best.

“Youma” are deadly shapeshifting demons that feast on human flesh. The world is in danger with their existence, and one such monster attacks a village. Raki, a boy living in this village, loses both his parents to the demon and is subsequently saved by a “Claymore,” who are half-human and half-youma, tasked with killing off the horrible monsters.

Raki is soon banished from his home, and he heads off in search of the Claymore that saved him, named Clare, deciding to follow her on her journey. Clare and Raki travel through different towns, killing off the various Youma along the way. Clare hopes to one day kill the Youma that was responsible for her choice to become a Claymore while the two learn more about her mysterious organization and comrades.

A battle between mortals and Satan himself. Whose side will the son of Satan choose? Rin Okumura is an ordinary yet troublesome teenager. Whose life on Earth is turned upside down when he is attacked by demons from Gehenna, the house of Satan. He soon finds out that he is actually the son of Satan, sent to this world to become a vessel for Satan so that he can invade it.

Rin decides to fight against the demons, protecting the world where he has lived for so long. He takes on the quest to fight alongside his brother, Yukio.

In this anime, we’re taken to a deadly reflection of Tokyo. The once-great city is reduced to fear when bloodthirsty savages called Ghouls attack. They possess the capability to live alongside humans, disguised as them.

We follow a shy and bookish kid, Ken Kaneki, who has a crush on Rize Kamishiro, another avid reader. However, Rize has more to herself than she lets on. The story gives us a look at what it is like to live as a ghoul and what it means to be alive in this cruel Tokyo.

Sanket Palwe
Sanket lives in Pune, India. He knows his non-mainstream anime just as well as he does the popular ones. He is a true-blooded otaku and has a deep interest for everything psychology and Japan.
RELATED ARTICLES
Find Similar

Animes Similar To Made In Abyss