Crunchyroll announced on Tuesday that it will host a digital event for its launch of the Goblin Slayer: Goblin’s Crown theatrical anime episode on July 28. Crunchyroll will be giving away a free digital poster signed by the director Takaharu Ozaki to eligible subscribers who stream the film before August 11. The anime will be available in the United States, Canada, the United Kingdom, Ireland, the Netherlands, Denmark, Norway, Sweden, Finland, Australia, New Zealand, South Africa, and Central and South America. 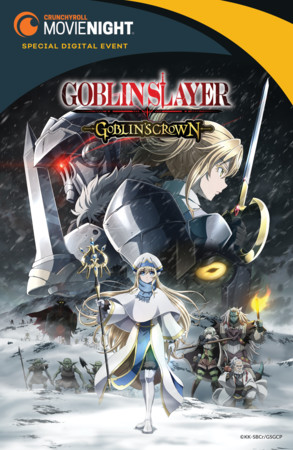 The anime opened in theaters in Japan on February 1. The anime’s Blu-ray Disc and DVD will ship in Japan on July 29.

“Please find any information on the Noble Fencer that disappeared after leaving to slay some goblins.”
Goblin Slayer and his party head up to the snowy mountains in the north after receiving that request from the Sword Maiden. A small village gets attacked, they encounter a mysterious chapel, and something about how these goblins are acting bothers the Goblin slayer.
“I’m going to take back everything that I’ve lost!”
In order to save the captured Noble Fencer, the Goblin Slayer and his party head to an ancient fortress covered in snow to face off with a powerful foe and a horde of goblins!

Sumire Uesaka joined the anime’s cast as the Noble Fencer.

Sing “Yesterday” For Me Release, Cast and Details

Pickles The Frog Anime Coming Up