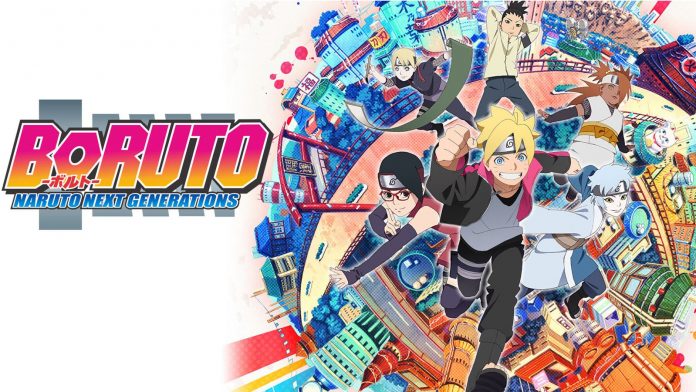 Previously in the anime, Boruto: Naruto Next Generation – The real test for Boruto has begun. It’s time for him to face Shojoji the powerful prisoner. Kakashi tells Boruto that it’s time for him to showcase his skills and the results of his rigorous training. If Shojoji gets defeated by him, this means he is now the master of his new Rasengan.

Also we see in the anime- Sasuke promising Shojoji to reduce his sentence if he fights Boruto and manages to stands still even after the fight. Thinking of the previous lost battle between him and Boruto, Shojoji decides to avenge his loss this time. Shojoji initially misses his targets while Boruto uses shadow clone and wind style Rasengan. He aims in finishing Shojoji in a single hit. But Shojoji also seems to have some backup plans. He uses a wind-style Zephyr shield and manages to stop Boruto.

Things are now heating up. Will Boruto defeat Shojoji? Well to find that out we have to wait till the release of the next episode of the anime. But before we make it into the release, we have brought some spoilers and updates on the same.

The next episode of the anime Boruto: Naruto Next Generation, i.e, episode 172 is all set to make its release on Sunday, 31 October 2020, at 5:30 PM JST. The anime releases a new episode every Sunday. It follows a weekly schedule.

Where to watch the anime?

The anime is officially available on Crunchyroll to watch online.

In the previous episode of the anime we see, Shojoji reminding Boruto about his abilities and powers. He also appreciates Boruto for strengthening his Jutsu, compared to their last time fight. Boruto realizes that the power of his Wind style Rasenga is not enough to defeat Shojoji.

While we see Shojoji teleporting behind Boruto in the anime. But Boruto manages to blow a powerful hit on Shojoji’s belly. Boruto then releases high compression Rasengan. While Shojoji blocks it with his shield. But Boruto keeps on increasing the power of the.

Tired Boruto happily collapses after the intense fight. Boruto smiles to himself as he perfectly managed to use his skills showing excellent outcomes of his training. Meanwhile, in the backdrop of the anime we see Sarada training with her parents.

It seems like Team 7 has done good with positive outcomes of their rigorous trainings. The upcoming episodes of the anime will be exciting to witness their performances in their next new missions.

Stand By Me Doraemon 2 CG: Trailer And More Revelations

B: The Beginning Season 2: Updates