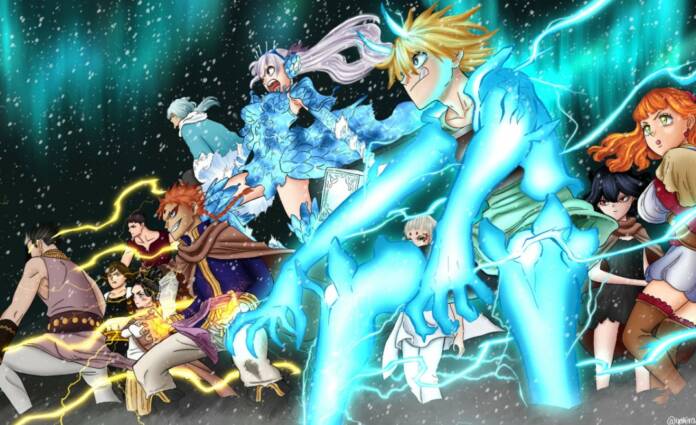 Black Clover Chapters are released weekly; however, the manga is going on a short break. The chapter was initially set to release on the 28th of February and has now been pushed back a week. Viz’s Media Website has sadly confirmed the delay. The studio is working day and night to ensure that the fans do not miss any action!

The manga is now at the peak of its war, and all of the spirit guardians are in action making the chapters more intense and exhilarating.

The chapter starts with Asta telling Lebe that he will be heading to the Spade Kingdom. Gimedolo reminds Asta that he is unable to do long-distance teleportation without Natch around. Asta realizes that even in his devil union mode, it will take a long time. He wishes to hurry as he is worried about the other magic knights and Captain Yami.

Meanwhile, in Spade, we witness the Mage defense force battling the rampaging devils. The devils start to overpower the Mages but are suddenly blasted by an intense fire. It turns out to be Fugolean and the Fire Spirit.

Suddenly, a vast energy rips through the Devils while leaving the Mages unharmed. The chapter ends with the Heart Spirit Guardians’ appearance: Patri, Leopold, Mimosa, Luck, Noelle, Secre, and Charmy ready to fight.

Where To Read Black Clover Chapter 284

The first three and last three chapters of the Manga are free to read, but you can join Shonen Jump if you wish to read the whole book.

New chapters are accessible for free, so as for Chapter 284, see you on the 7th!

Black Clover Chapters are dropped at midnight (12:00 AM JST), and the English translations are available soon after. They can be expected at the following times:

Pacific Time: 9 AM on 7th March