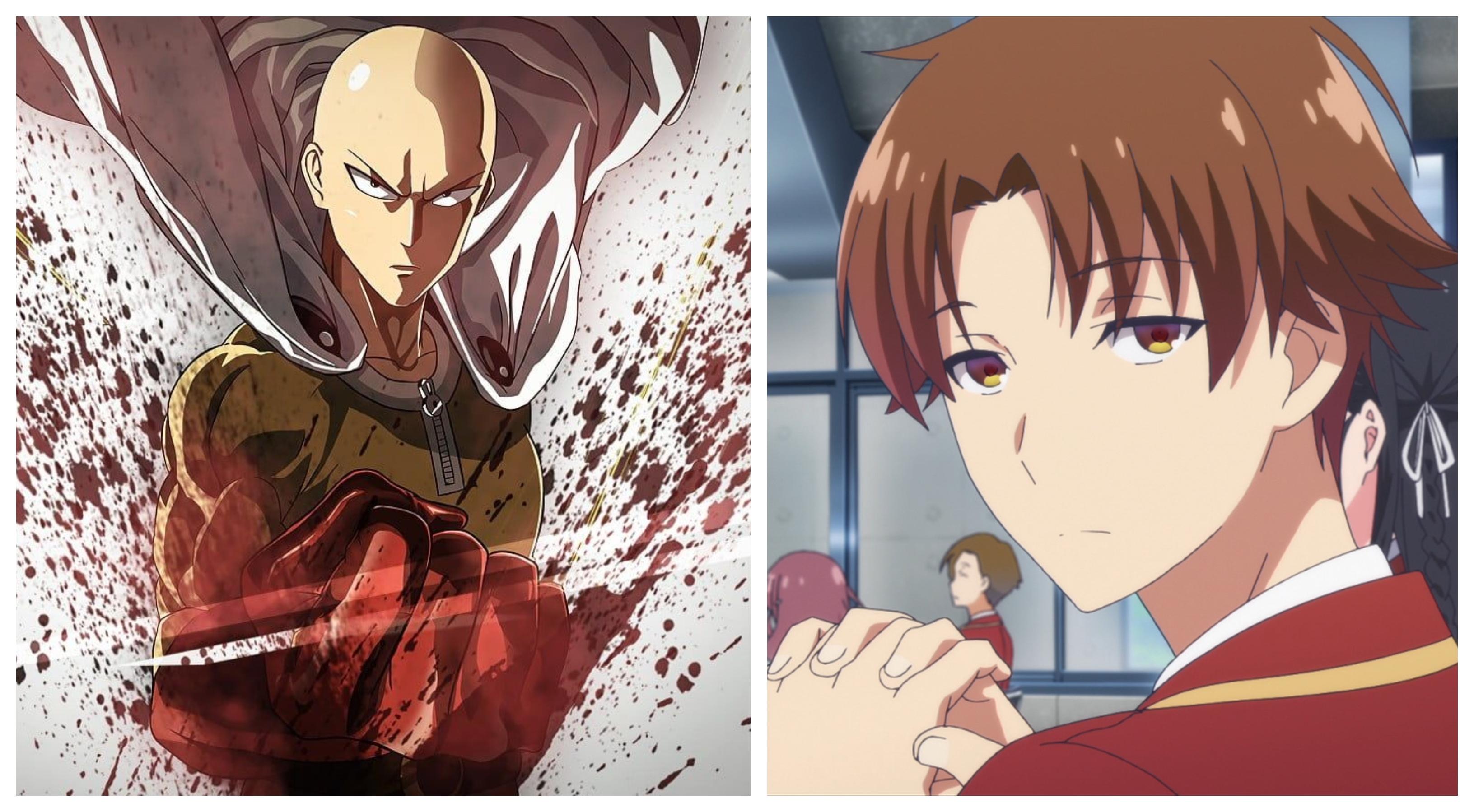 Animes love to show exaggerated characters. They make for great sources of wonder and entertainment for the viewers. Overpowered characters are one such form of exaggeration. These characters are extremely powerful than the power levels that we are used to seeing. Here, we’ll be taking a look at the best anime with op mc. Here OP MC stands for the overpowered main character.

Anime, where the main character is op are so fun to watch because they help us see a part of ourselves in them. We connect with them and watching them succeed fuels our joy. Moreover, the hype associated with these characters is a lot more fun than the average protagonists that are pushed around. Without any further ado, let’s jump right into the list-

10. That Time I Got Reincarnated as a Slime– Rimuru Tempest 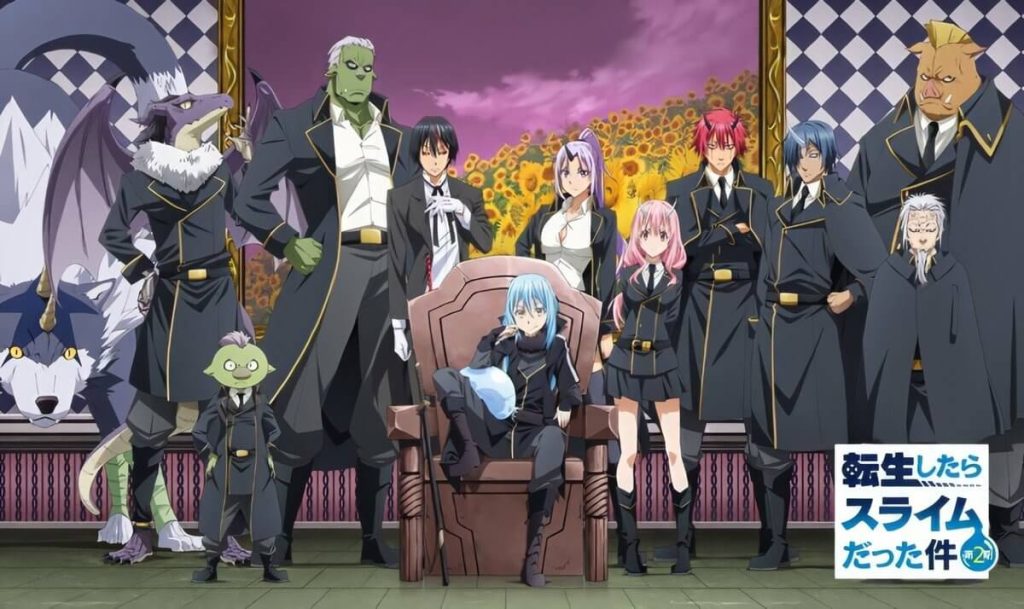 That Time I Got Reincarnated as a Slime- Rimuru tempest (Image: Monsters and Critics)

This anime cranks up the power scale, as Rimuru Tempest seems to have an infinite potential of power. His insane abilities are further multiplied by his association with the Dragon Veldora. He can access the power of such a mighty beast, access to whom is blocked from the others. He also has beside him the Great Sage, helping him build artifacts and technologies from modern Earth. Moreover, Rimuru has a mighty army at his disposal.

9. Classroom of the Elite– Kiyotaka Ayanokoji 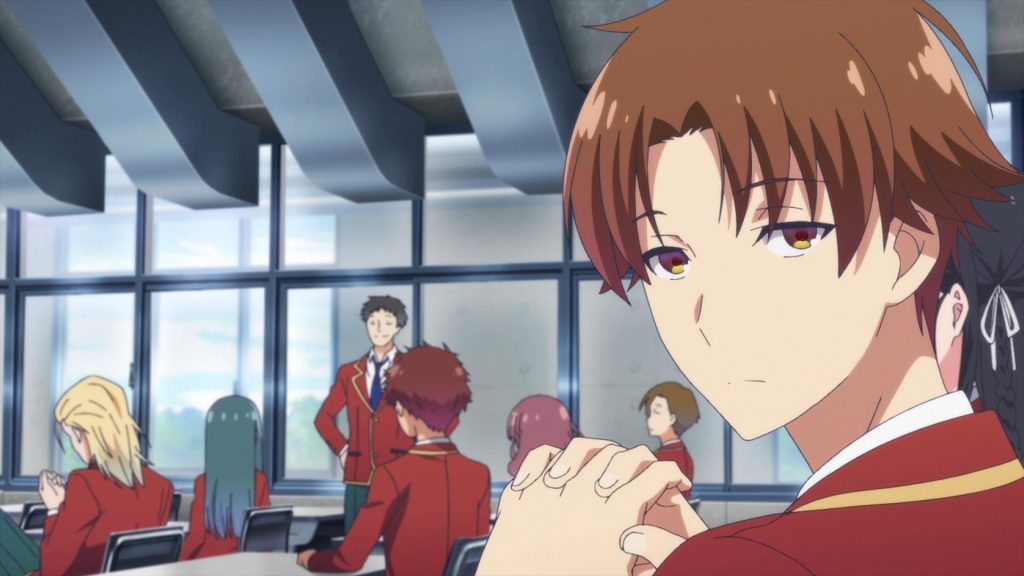 While Ayonokoji is still a mystery in the anime, it’s still evident that he is actually hiding many abilities. He has a lot more than meets the eye. Ayonokoji is academic but also street smart. While he has the brains, he also has commendable physical abilities. Intellectual and respected by many powerful fighters throughout the school, there’s no doubt that Ayanokoji is an overpowered student. Why he is placed in Class D is, however, still a mystery, very likely linked to his past.

Saiki is an average kid to the rest of the world. However, he and his family hide a secret from the rest of the world. He is actually an overpowered psychic, capable of causing heavy destruction. The guy literally needs gadgets to keep his powers in control! He has more than 30 strong psychic abilities, like, telepathy, teleportation, X-ray vision, mind control, precognition, etcetera. Check out the show on Crunchyroll to find out more about his insane feats.

Ainz stays to play his favorite game, Yggdrasil, in its last moments before all its servers are shut down. However, he soon finds himself stuck within the game, finally beginning a quest to find out more about what has happened and search for more players like him.

His power in the game comes from his talent of gathering information about his enemies and attacking them at their weak spots. Moreover, he is a level 100 player and has lots of Player vs. Player experience. He is capable of conquering entire nations with a powerful army and magic abilities. There is no doubt that he is one of the most overpowered main characters in anime. 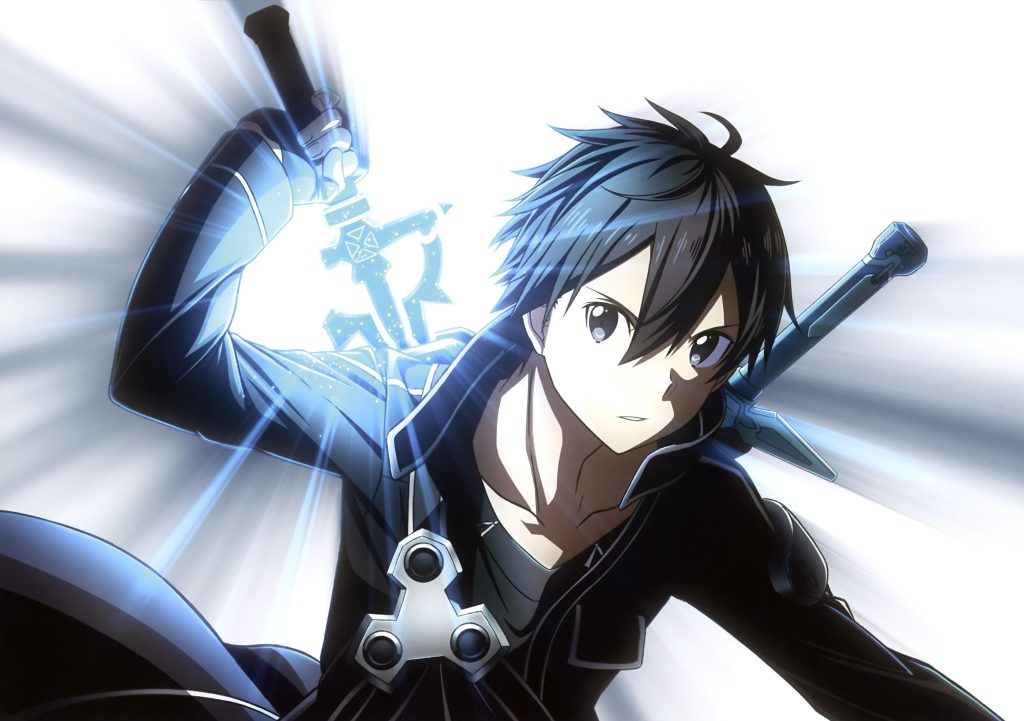 Isekai anime is excellent for otakus to lose themselves in a fantasy world.  Sword Art Online is one of the best isekai anime with op mc where our protagonist Kazuto Kirigaya a.k.a Kirito is overpowered. The escapism becomes even more enjoyable when you connect with a character capable of slicing through monsters and other opponents in the blink of an eye. Kirito is a character that was created for this very purpose.

In the anime, his overpowered nature is shown time and time again. He knows the games he plays in and out and is a diligent, hardworking player. With time, he has collected many abilities, making for a majorly powerful character. This characteristic of Kirito has also gained popularity as a meme. 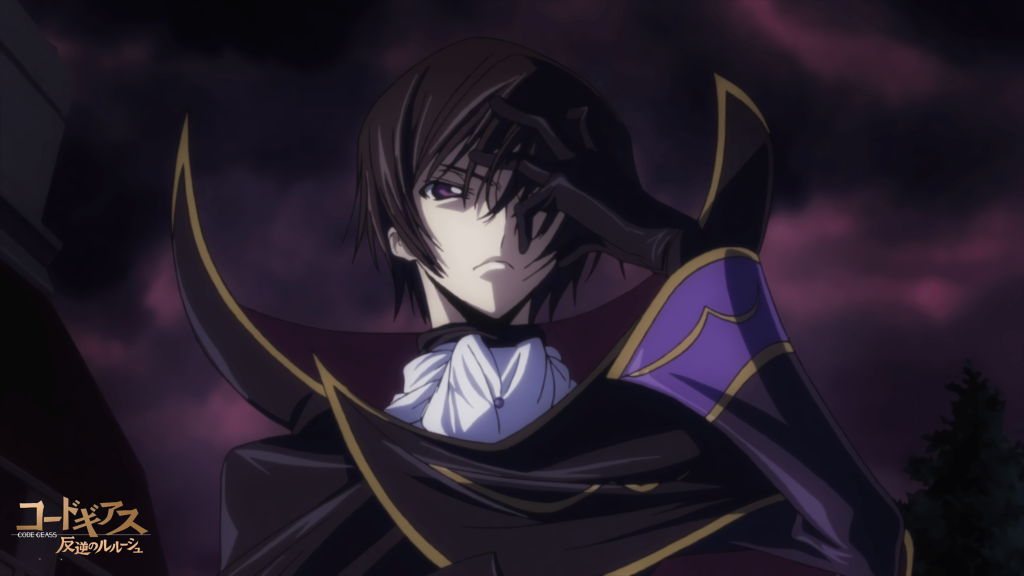 Antihero, cold and manipulative character, Lelouch is capable of so much. In the Code Geass anime, he makes excellent use of his tactical and strategic mind. He is capable of taking down nations with the help of his words. And this is all without the powers of his eyes. The Geass ability further allows him to make any person his living, obedient doll, making them his pawns in a chessboard. And boy, does he know how to play his pawns well! 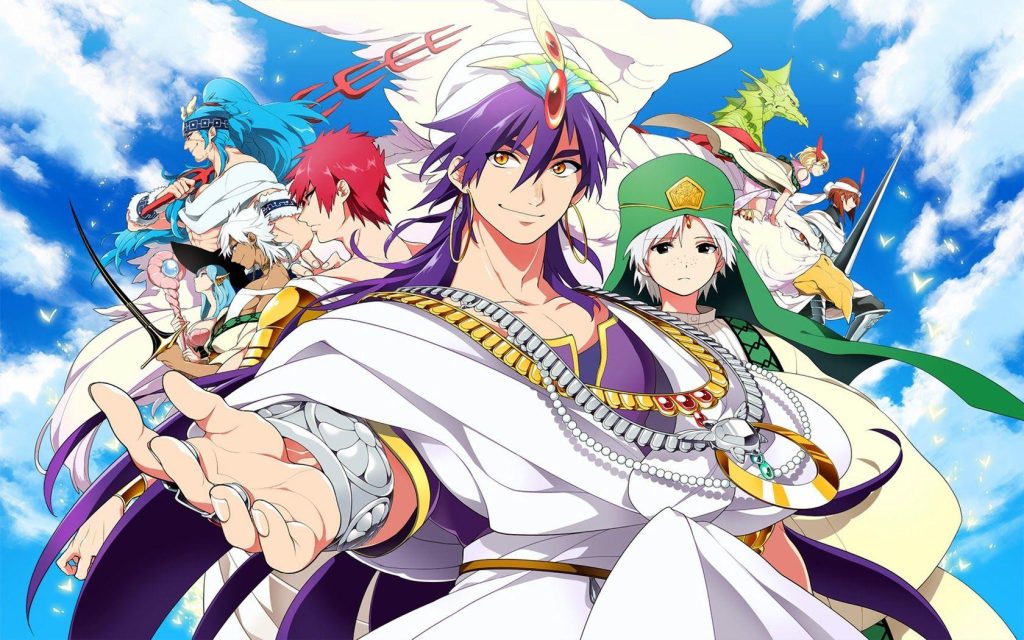 Sinbad was first introduced in Magi: The Labyrinth of Magic and appeared as a fun-loving, cool character. But it soon became apparent that there’s more to him. Within a matter of few episodes, we began identifying him as one of the most powerful characters in the series.

He has more jinns than anyone else in the series. He is skilled in Magoi manipulation and has an abnormally large amount of magoi for a human. Furthermore, he is a skilled swordsman, knows martial arts, and can rewrite the Rukh. 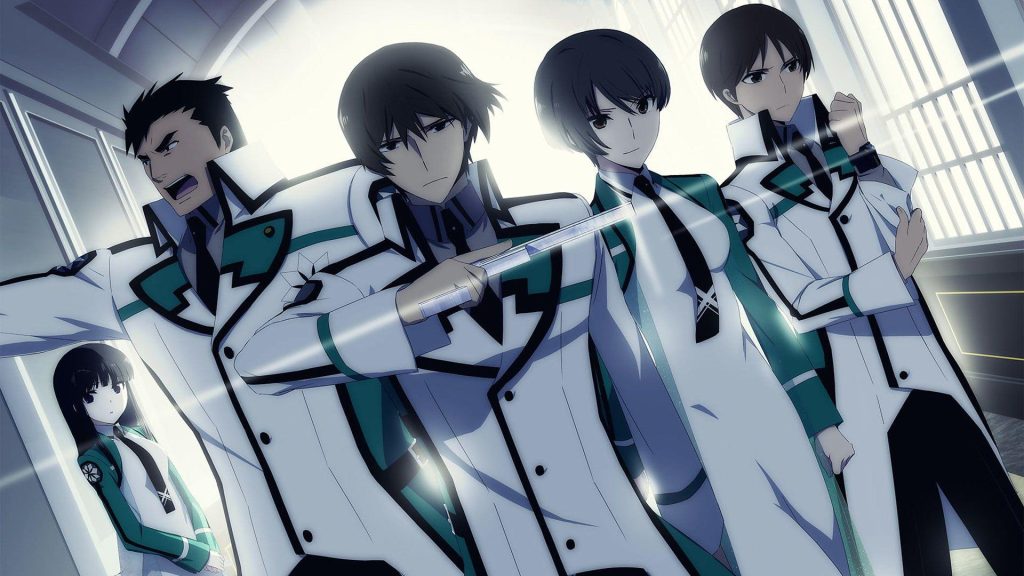 In a school with students that can use magic, Tatsuya is thought to be unable to wield magic and placed in a lower group called “Weeds.” However, it turns out that he is an excellent magician. He is also intellectual and analytical- he solves the most complex equations in his head and barely lets his emotions show.

As the show progresses, we learn that there’s very little that the guy ISN’T good at. While he is powerful, he is also the world’s best weapon engineer. He can cancel the magic of his opponents and is well-versed in the theory, capable of competing with the world’s leading theoretical magicians. 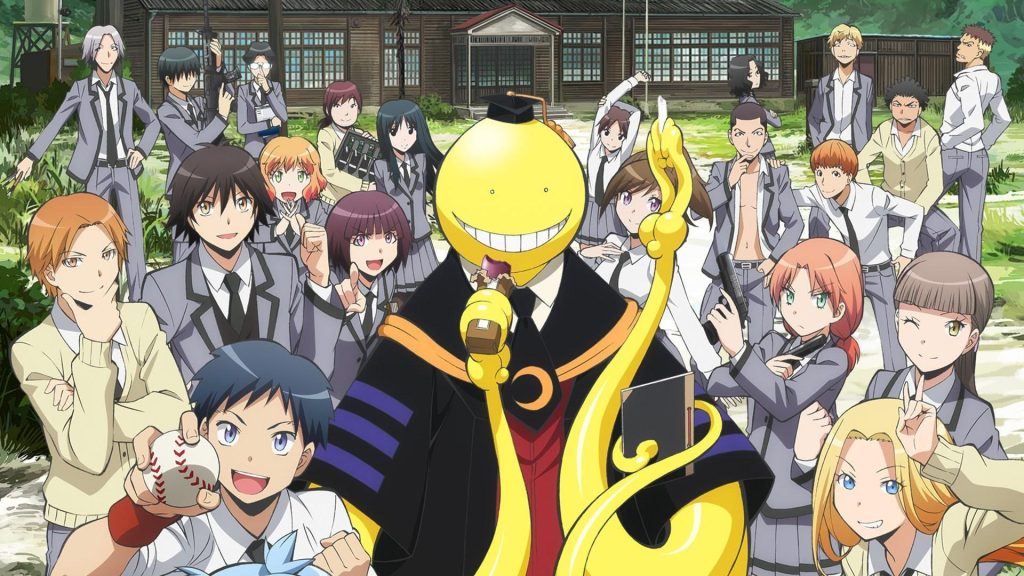 Koro-sensei is so overpowered that he himself teaches a class full of humans to kill him. With only one year at hand, the students try all they can to destroy the alien, but their failure will mean the destruction of Earth. He has many abilities, like bending into any shape, fitting into the smallest area, super senses of hearing and smell. He is capable of shooting a powerful laser beam of energy as well. He’s got superhuman reflexes and speed.

Even if you do somehow manage to get him, he can just regenerate himself. His body and mind are constantly evolving as he learns more about his surroundings. Moreover, there’s his absolute defense form- an ability that allows him to shrink and surround himself into a high-density energy crystal that’s impenetrable even by a nuclear attack.

The story of OPM is about the life of a human that has achieved a demonic amount of strength, becoming so powerful that he lost his hair in the process. Saitama can defeat the mightiest of opponents by a single punch. Be it aliens, monstrous beasts, or scientific absurdities; the boring superhero can deal with anyone. Fighting has become so easy for him that defeating enemies now seems mundane and boring. Whether or not he is the strongest, however, is yet to be discovered, as we haven’t seen Blast, the No.1 hero, yet.