The animes that we watch are created by teams of animators that pour in their sweat and tears into making the fantastic art pieces we enjoy oh-so-much. It might come as a shock to you, that many anime you like come from the same studio. For instance, Your Lie In April and The Seven Deadly Sins are from the same studio, A-1 Pictures. Attack on Titan, Haikyuu!!, and Kuroko No Basuke are all from the industrious hands of Production I.G. (WIT Studio). In this list, we’ll be taking a look at the top 10 best anime studios that are definitely worth your time. 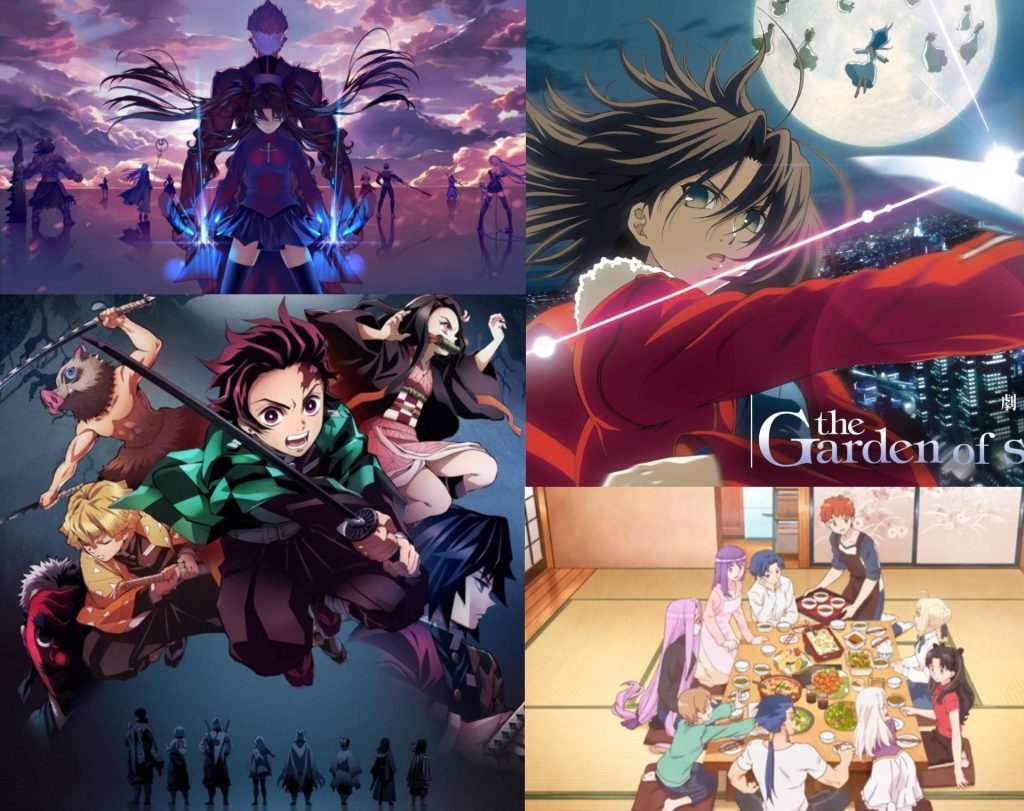 The studio was started in 2000 and debuted with an anime in 2002. The members were mainly former employees from the Telecom Animation Film. The studio rose to widespread popularity in 2007, with their The Garden of Sinners.

In 2007, this studio was the one responsible for Kara No Kyoukai, an anime with exceptional animation, even by 2021 standards. The animation quality was so excellent, it was far ahead of its time.

Currently, the studio is well known for working on Demon Slayer and Fate Series. However, a few anime fans also consider it overrated due to a lack of many solid hits, except the few mentioned above.

The works of Ufotable include- 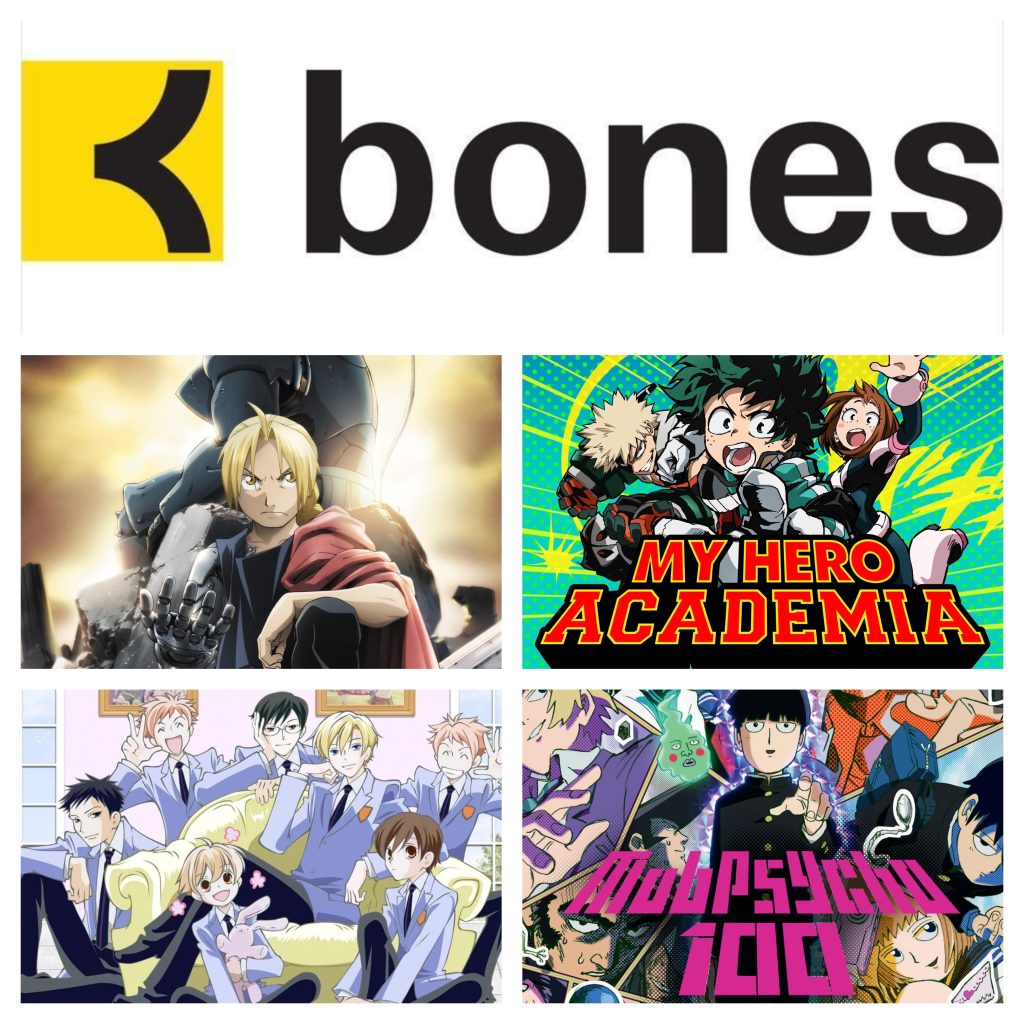 My Hero Academia, Both versions of Fullmetal Alchemist, Ouran High School Host Club, and many more phenomenal anime are created by the Studio Bones, a studio that began in 1998, and went on to gain lots of fame.

The works of this studio are fascinating, and they are involved in anime of various different genres. Many creations of this studio have obtained mainstream fame, and Cowboy Bebop is an anime that has been very well received in countries outside Japan as well.

Works of Studio Bones include- 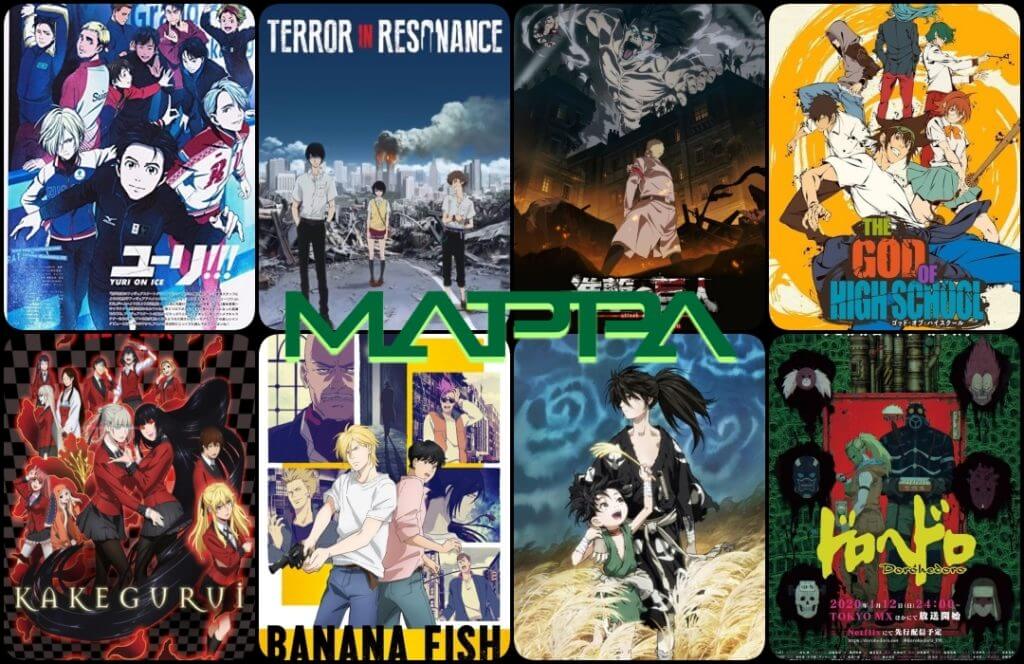 Mappa is a very young studio compared to most anime studios, and was started in 2011 by a former employee of Madhouse, Masao Maruyama. He was the co-founder of Madhouse, an insanely successful studio. So it comes as no shock that his work with Mappa was also a great success.

The animes of this studio are directed by much younger directors, who showcase new ideas and themes through the platform. This studio is known to take up topics that others would fear. For instance, Terror in Resonance is an anime about Terrorism.

Other works of Mappa Studio- 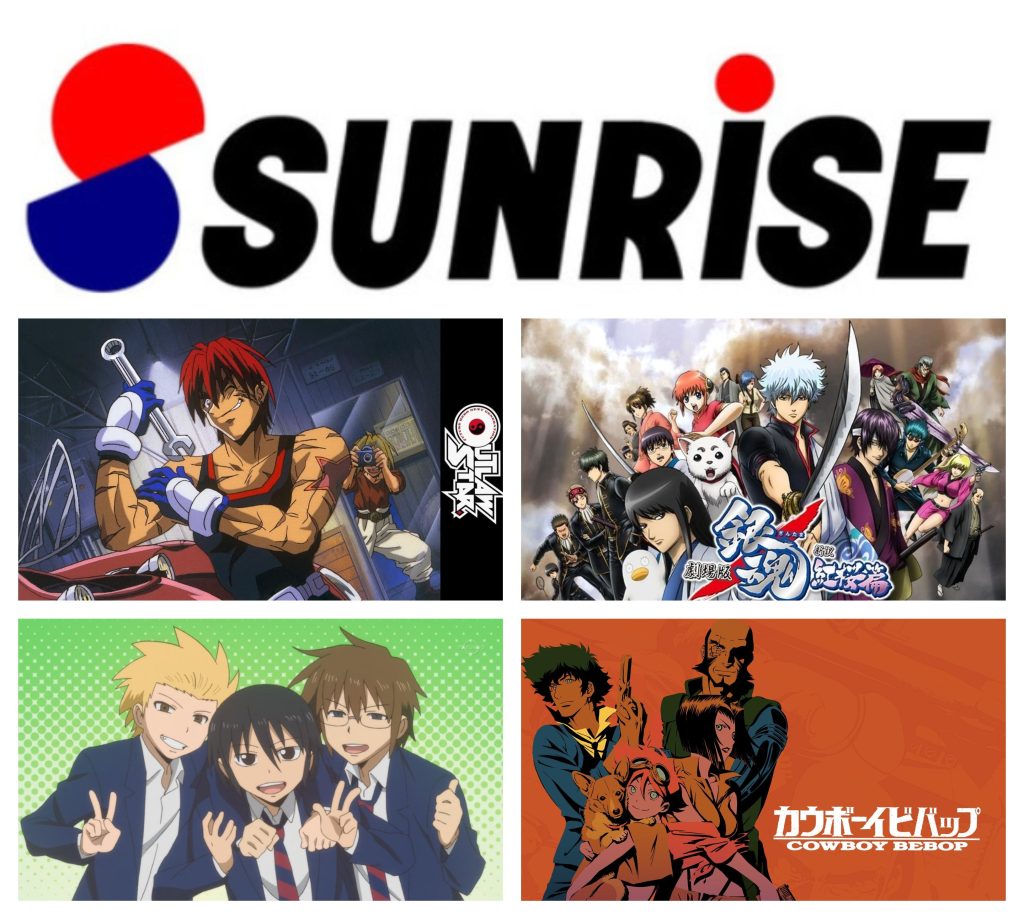 This studio is one of the oldest, and it is considered one of the biggest, with 13 studios of its own, each studio branching into different genres of anime. However, the studio as a whole is mainly known for Mecha anime. The studio has chosen to make anime in this niche to distinguish its own identity amongst many anime studios.

With the massive amount of shows in its basket, there’s a good chance you’ve seen at least one show from the studio. Gintama from this studio is considered to be one of the best comedy animes. It is also home to Cowboy Bebop, an early-age anime sensation.

Some anime by Sunrise Studio- 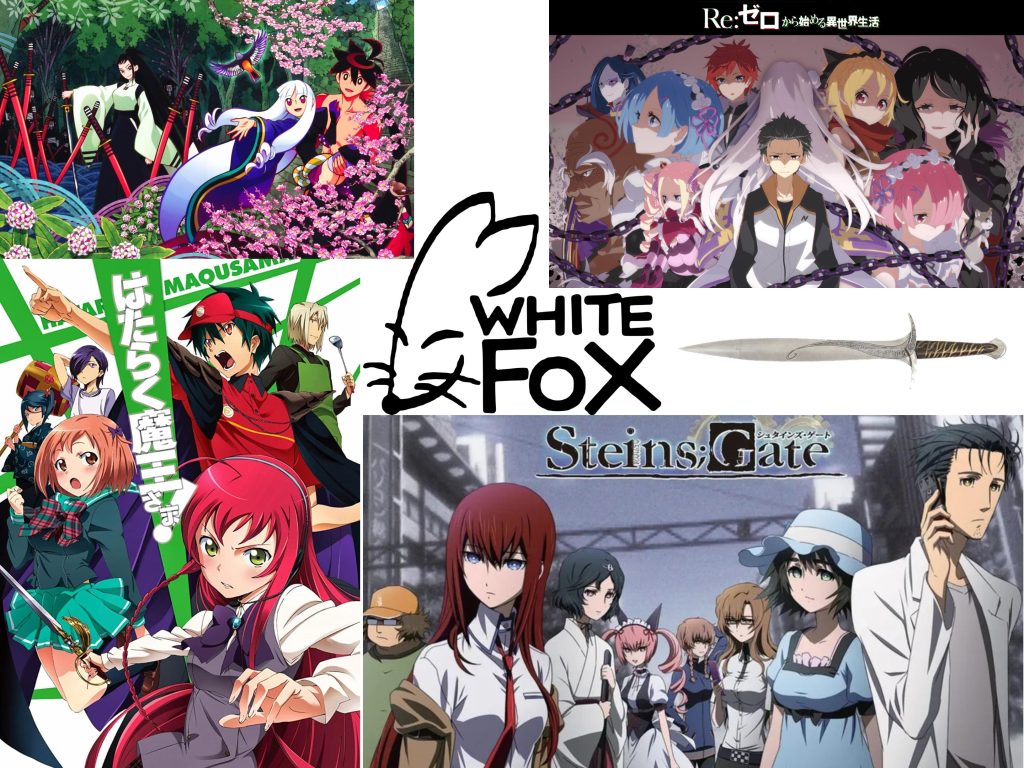 This studio has a very unique style in anime. While it has many thought-provoking and interesting anime like Steins; Gate, it also has shows focused on brutal violence and beautiful animation like Akame Ga Kill, while also containing the famous reverse-isekai, The Devil Is A Part-Timer.

This anime studio has a very interesting catalog of anime. I use the word interesting because of the diversity in genre and reception of the anime produced by the studio. Some animes are received very well by the viewers, leading to phenomenal growth in their popularity. While some anime from A-1 Pictures are surrounded by controversy among fans (looking at you, Sword Art Online), it also leads to an increase in popularity, though, so it works for the studio.

It was created in 2005 to produce animation for the Aniplex title. However, it soon grew into a full-fledged anime studio with its own shows.

Some shows from A-1 Production- 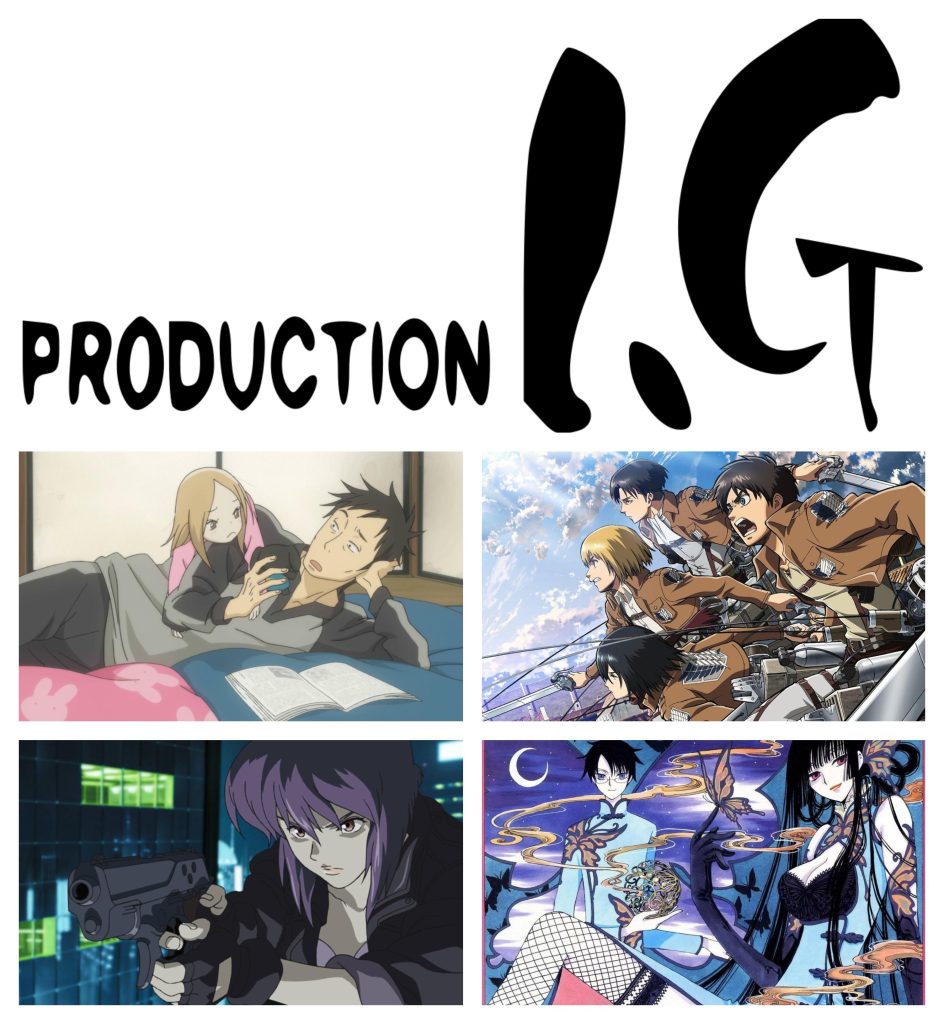 This studio was started in 1987 and quickly made a name in the industry with its attitude of paying great interest to detail while animating. They make sure to treat every manga they adapt with great care and attention.

Production I.G. completely shook the anime industry with its work on Ghost In The Shell. The anime had great hand-drawn animations and visuals. Moreover, the use of C.G. (Computer Graphics) was highly appreciated. With the coming of this anime, the industry took a course of revolution, and now, C.G. is pretty much a norm while creating anime.

A subsidiary of Production I.G. is WIT Studio, and their first work was Attack On Titan, a series every anime fan has heard of. The animation on this series quickly shot the studio to fame. The beautiful sceneries, visuals, and fluid battle movements are highly praised in the anime community.

Some anime by Production I.G. 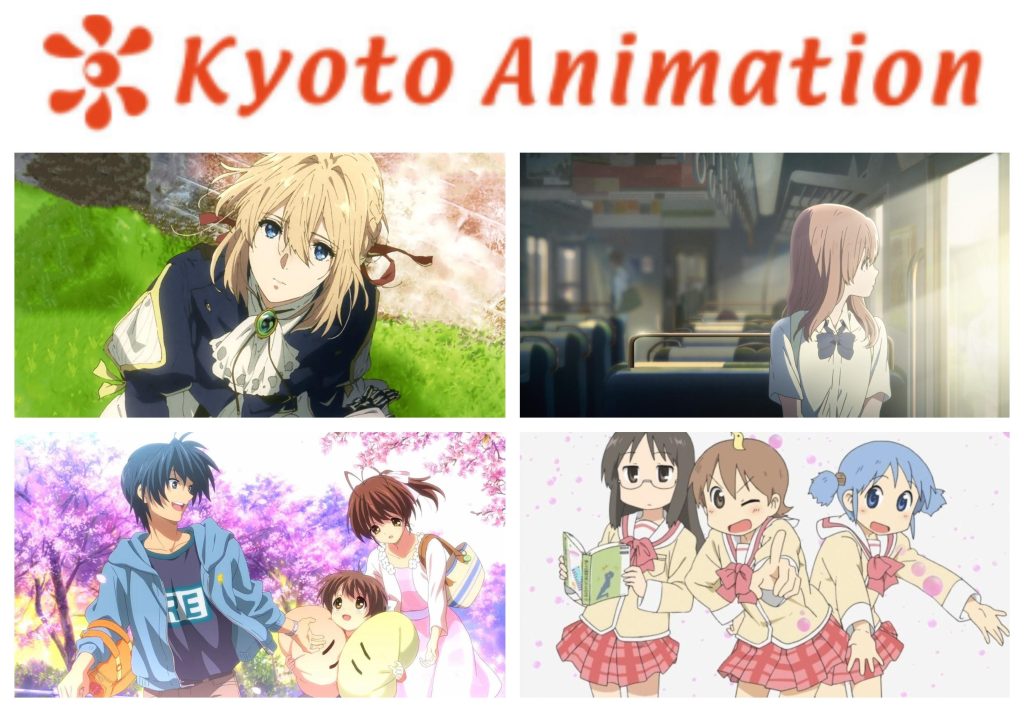 KyoAni was started in 1981 and is well known for its animation in the community. It has gained great fame for its moe-style of drawing characters, as well as the immersive sceneries in its animes.

Moreover, the studio is well-known for its powerful stories and down-to-earth characters. It is mainly recognized for its romantic animes, but it also has a catalog of Fantasy, Supernatural, Sci-Fi, and Slice-of-life animes.

Kyoto Animation is much smaller than others on this list. However, it has still managed to make critically acclaimed anime, standing toe-to-toe with much bigger studios. It has maintained an excellent balance of T.V. shows and theatrical releases while occasionally also releasing OVA’s and ONA’s.

Some anime from Kyoto Animation-

KyoAni was subjected to an arson attack on July 18, 2019. Thirty-six people were killed and 33 injured in the fire that engulfed the office. Most of the materials and computers were destroyed in the incident. However, the studio stands strong; with help from the wholesome community, fans, and companies, the studio received support and donations to once again grow to its glory. 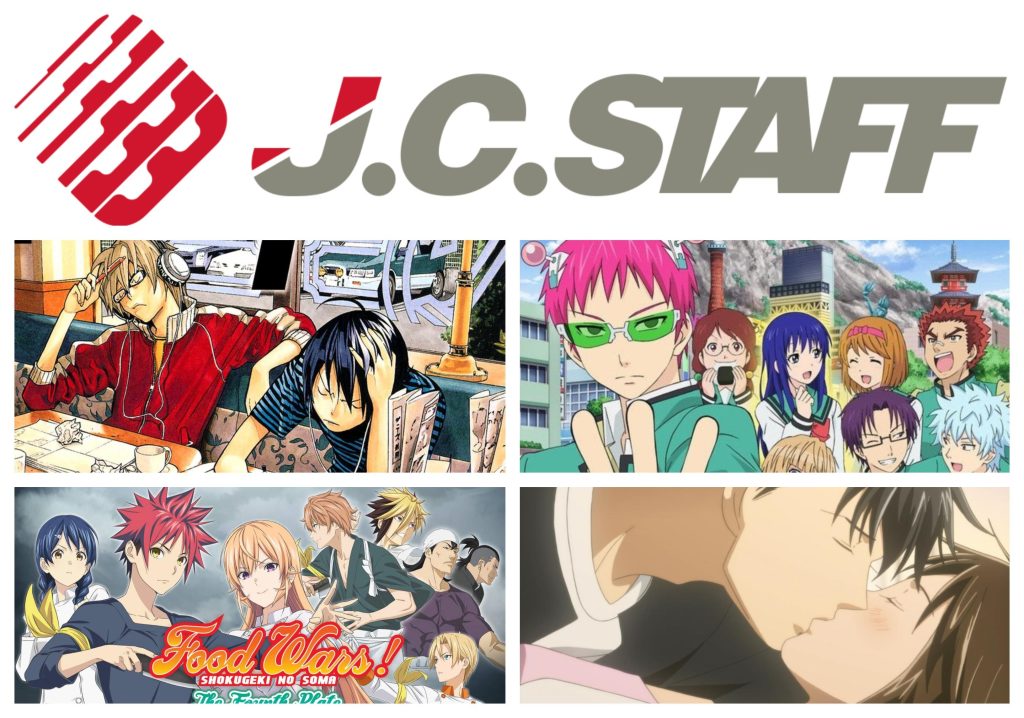 This is a studio that doesn’t receive much talk and praise compared to other anime studios. However, it is a great studio and has animes for every fan out there. They have made animes in many different genres, ranging from comedy, romance, and drama, to fantasy, thriller, and science fiction. It also has mecha series, and some ecchi ones as well.

J.C. Staff is great because it likes to try out animes that are unique in their own way and different from the rest. Some anime from J.C. Studio- 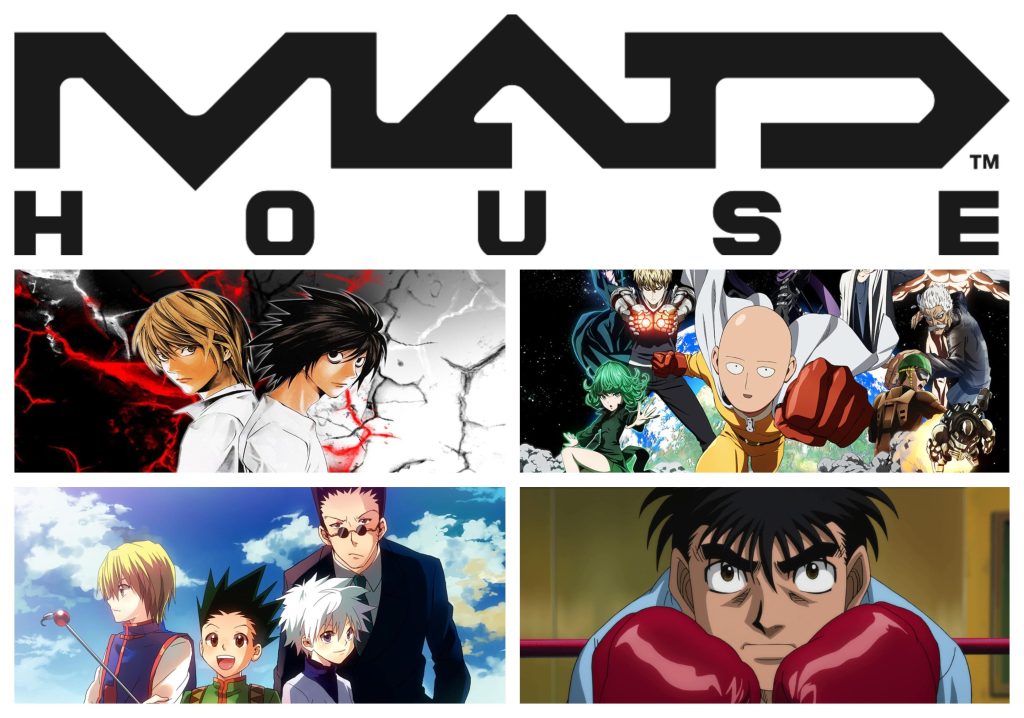 Madhouse Studio was founded in 1972 and is well-known for its mature anime, aimed at adults. In the earlier days, this is what helped the growth of anime in the western world. However, with time, the studio has branched off to produce many famous shows aimed at children and has also taken on some unorthodox and dark stories, far away from the shonen tropes in anime.

The studio is highly respected among fans and anime communities. The crisp animation and gripping stories have helped grow the studio to dizzying heights. The studio always manages to deliver ground-breaking anime every anime season, and this makes it worthy of the number one spot among anime studio.

Some works of Madhouse are-

Anime studios have grown so much since their infancy in the late 20th century. They work hard and choose their anime carefully. They work hard for hours on end, animating the scenes, working on the storyboards, bringing these anime that we love and enjoy on our laptop, mobile, and T.V. screens. It is not an easy task to develop and animate a story, and these studios are the pillars of an industry that is growing rapidly. The influence of these on animation standards worldwide has already been felt. We hope to see them grow and reach greater heights in the future.